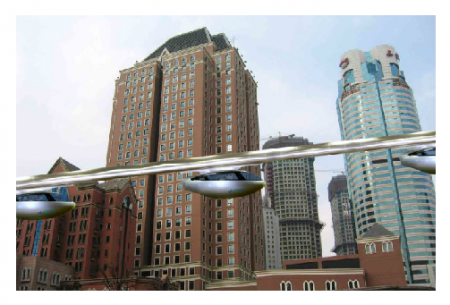 If you’ve ever seen photos from those old tomorrowland-style expos in the 1950s, the future sure looked bright. Alas, the jetpacks and the hovercars still haven’t come to pass — but a new public transit initiative is getting us a little closer.

Officials in Tel Aviv, Israel, announced this week that the long-anticipated skyTran system should be up and running by the end of 2015. Tel Aviv — globally famous for its terminally congested traffic — will serve as the pilot program for planned systems in Europe, India and the United States.

The skyTran system uses a series of elevated magnetic tracks from which autonomous two-person vehicles are suspended. Call up a sky car on your smart phone and the pod-shaped vehicle will pick you up at a designated station and whisk you off to any other station on the system.

SkyTran cars on the initial 500-meter loop, built on the campus of Israel Aerospace Industries, will travel at speeds of up to 70 kilometers/hour (43 m.p.h.). Speedier vehicles will be introduced once the larger commercial infrastructure is in place.