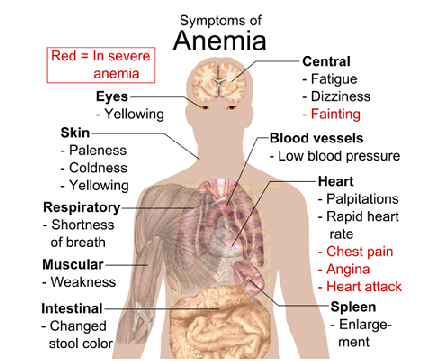 Have you been feeling tired and listless lately and it is not necessarily linked to overwork from physical exertion, stress or a diagnosed illness? You may be anemic and the diagnosis needs to be considered and investigated. There are underlying diseases and conditions which can compromise how the body is able to provide this vital life-giving fluid which sustains us.

The blood is the means by which oxygen and nutrients are transported to tissues and organs. The oxygen binds to hemoglobin sites which are on the red blood cells. A low count in the red blood cells or low hemoglobin levels results in anemia. It is the most common of all the blood disorders and has been estimated to affect approximately 3.5 million Americans. About half of these anemic persons are children and teenagers.

In all, there are about 400 different types of anemia and they are classified based on the following:

Hemolysis: is the breakdown in red blood cells.

Hemorrhagic: is the loss of blood as a result of either acute or chronic bleeding.

Hematopoiesis: speaks to a problem with the production of red blood cells which can either be a decrease in the number of RBC or malformation of the RBC.

Deficiency in vitamin B12

Deficiency in iron intake or uptake. Iron is an essential component used to make hemoglobin. A diet lacking in iron rich foods is common among children and teens, an increase in the demand for iron as in pregnancy and breast feeding, blood loss as happens with menstruation, poor absorption due to intestinal diseases can all potentially result in iron deficiency anemia.

This type of anemia is far more common than the others. Children who have anemia have several challenges when they are in school including learning and development issues. Adolescents have poor eating habits and this can range from bingeing, missing meals, and overeating junk foods. Adolescent females can have heavy menses which they tend not to discuss with their parent or doctor due to embarrassment. Male adolescents, on the other hand, can have growth spurs which results in an increased demand for iron.

With respect to adults, risk factors for iron deficiency anemia include:

Pale skin or pallor is typical and also the tongue and mucus membranes of the lower eyelids.

Jaundice or yellow coloration of the skin and eyes

Pica which is the craving to eat unusual things such as paper, soil

A diet rich in iron

Iron supplement (as recommended by a doctor)

It is very important to have foods rich in Vitamin C or Vitamin C supplements as iron absorption is enhanced by Vitamin C. Some good sources of Vitamin C are oranges, grapefruits, tangerines, berries, tomatoes, kiwis, potatoes, broccoli, and sprouts.