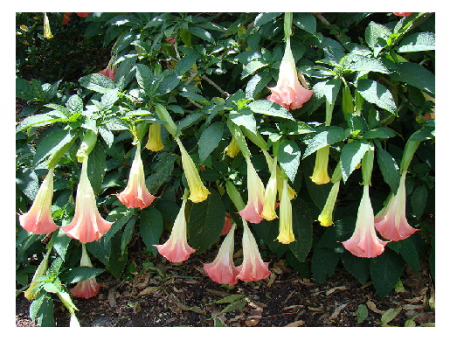 In a report by DailyMail.com, a 16-year-old Mexican orphan girl, Alexandra Huerta was hospitalized after taking the ‘shamanic’ drug Brugsmansia and using the ouija board in an attempt to contact her dead parents.

A video taken by paramedics shocked the world as the little girl appeared to be in the depths of ‘possession’ of evil spirits.

Brugsmansia, a poisonous plant, also known as Angel’s Trumpet, is grown widely in the tropical regions of Latin America.

It induces dark hallucinations, confusion, muscle paralysis, and can lead to temporary insanity or death in large doses. It is used in many shamanic religions in Mexico to allow adherents to make contact with the spirit world.

According to the report, minutes after Alexandra along with her brother and cousin ingested the drug and started playing with the Ouija board, they began screaming, complaining of terrible visions, and attempted to hurt themselves.

“She started convulsing and screaming of terrible visions,” said Maria Camano, 48, guardian in the house where the three young people tried to make contact with the dead.

The report continued, “I thought they were going to lose their minds,” said Maria. “There is a lot of shamanism in the hills where we live and I was terrified when I saw what the Ouija had done to them.

“She was possessed by a spirit who wanted to harm her.”

The report noted that Maria was turned away by the local priest when she sought his help, on account of not attending church regularly.

In the video that gained rapid attention on the Internet, the little girl switched between groaning, laughing hysterically, and muttering to herself – “I’m going to die.”

“Alexandria was speaking in tongues and in a voice that was not her own,” said her guardian.

The report also said that the children’s guardians encouraged them to drink the concoction with the view that it would open their minds to the spirits.

The children, after spending a night at the hospital returned home, but have no recollection of what took place.

The Ouija board, also known as the ‘spirit board’ was a Victorian parlor game in which participants move a wooden or glass indicator, supposedly channelled by spirits across a board with the letters of the alphabet, the numbers one to nine, and the words ‘yes,’ ‘no,’ ‘hello,’ and ‘goodbye.’

Mainstream religions have taken exception to their members using the Ouija board as they deemed it an article of the occult world which could be harmful and a spiritual threat.

However, many people view it as just a game with no special powers.