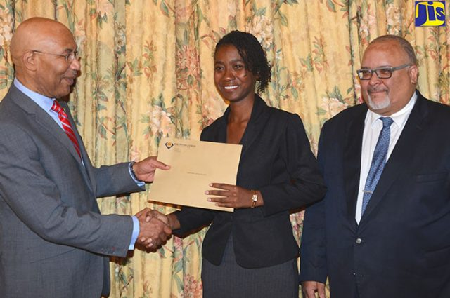 Equipped with a remarkable track record of academic brilliance, Jamaica’s 2017 Rhodes scholarship recipient, Shakeba Foster, intends to use the training she will pursue at the illustrious Oxford University in the United Kingdom, to make a significant contribution to the country’s economic growth and development.

“I hope to gain not just more academics, not just more knowledge, but I hope to have an experience in forming relationships, in learning how I can actually make the best of this scholarship and how I can impact Jamaica and the youth in a positive way. So, I am just going out there trying to do my best and trying to gain all I can in all areas,” she tells JIS News.

The brilliant University of the West Indies (UWI) graduate topped a field of 10 candidates (five males and five females), shortlisted for consideration and selection as Jamaica’s 2017 Rhodes Scholar.

The announcement was made by Governor-General, His Excellency, the Most Hon. Sir Patrick Allen, during a ceremony at King’s House on November 17.

At only 23 years old, Ms. Foster says she is “excited and surprised” to have been as selected the Rhodes Scholar for 2017, having edged out fellow nominees Jessica Yapp, Jordon Carty, Jacob Phillips, Michael Basir, Franz Brown, Jermaine Brown, Janelle Walker, Petagay Facey, and Sheniele Grant.

“Before I applied for the scholarship I was a little bit doubtful, so I took a while before I finished the application, and then coming here and seeing all these brilliant people, I did not think I would end up here, so I am just grateful,” she says.

Ms. Foster, who resides in the community of Riversdale in St. Catherine, praises her aunts and her mother for the supporting role they have played in her life over the years, pointing out that “they have definitely been a strong backbone to me.”

Already decorated with a Master of Science degree in Economics (MSc) (Distinction), UWI; and first-class honors, Bachelor of Science (BSc), Banking and Finance, UWI; and an Associate in Business Studies, St. Jago High School, Ms. Foster plans to pursue an MPhil in Economics when she takes up her scholarship at Oxford University next year.

Prior to the announcement, the Governor-General congratulated the candidates on their achievements and wished them continued success in their various endeavors.

“We hope there’s a way that you all can form an association which will impact Jamaicans, and let them learn from you because you are indeed models for the rest of youngsters in Jamaica,” he said.

Jamaica’s Secretary to the Rhodes Trust and Secretary of the Jamaican Selection Committee, Peter Goldson, said it was extremely difficult to select a winner as all the candidates were excellent.

He said Ms. Foster stood out as the winner as she is very intelligent and very thoughtful.

“She has many thoughts about education in Jamaica, about its economic problems, about the IMF program and the way forward, and I think she is someone who will make the Rhodes Scholarship Program extremely proud,” Mr. Goldson said.

The Rhodes Scholarship is presented from the Rhodes Trust, which was established by British diamond magnate and imperial statesman, Cecil John Rhodes.