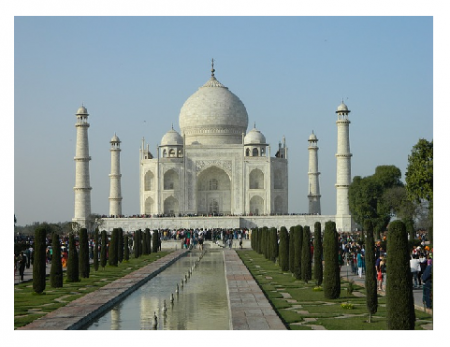 Throughout the ages, many different lists have been compiled cataloguing some of the world’s most spectacular natural wonders and manmade structures.

These various sites both ancient and modern boggle the mind and one can’t help but to look at them in awe.

Today, the new list of seven wonders of the world includes: This impressive structure is built on the top of a mountain overlooking Rio de Janeiro in Brazil. Standing at 124 ft (38 meters) tall, this massive statue not only dominates the skyline of Brazil but also symbolizes the country’s Christian faith. It was considered the largest Art Deco statue in the world from 1931 until 2010 when it was topped by Christ the King Statue in Poland. This series of fortification made of stone, brick, tamped earth, wood, and other materials have stood the test of time and today has come to represent the resilience of the Chinese people. It is officially the longest-man made structure in the world. This white marble mausoleum is located in Agra, Uttar Pradesh, India. It was built by Mughai emperor Shah Jahan in memory of his third wife, Mumtaz Mahal. It took 22 years and 20,000 workers to complete the building of the Taj Mahal. It became a UNESCO World Heritage Site in 1983 and is visited by millions of tourists yearly. Sited in Rome, Italy, the Colosseum also known as the Flavian Amphitheater was built in A.D.70 . It is considered one of the greatest works of Roman architecture and engineering. The Colosseum, it is said could hold an estimated 50,000 to 80,000 spectators, and was used for gladiatorial contests and public spectacles such as mock battles, animal hunts, executions, and re-enactments of famous battles and dramas based on Classical mythology. Today, although only the bare structure can be seen, it represents an iconic symbol of Imperial Rome and is visited by millions of tourists from around the world. Chichen Itza, found in Mexico was once one of the largest Maya cities and the most sacred place in Mayan society. Today, it is the most visited archaeological sites in Mexico with an estimated 1.2 million tourists visiting each year. Machu Picchu is located 2,430 meters (7,970 ft) above sea level and is situated in the Cuzco Region in Peru. It is believed by archaeologists that Machu Picchu was built as an estate for the Inca emperor Pachacuti (1438-1472) and is often referred to by many people as the “Lost City of the Incas.” It is also regarded as the most familiar icon of Inca civilization.Today, Machu Picchu is a UNESCO World Heritage Site and in 2007, it was voted one of the New Seven Wonders of the World in a worldwide Internet poll.The site has also become one the most visited tourist attractions in Peru since its discovery in 1911. Petra, is a symbol of Jordan, as well as Jordan’s most-visited tourist attraction. Carved out of solid red rock in A.D.2, it has been sheltered and protected against the elements overtime, given its unique fortress-like position. The film, ‘Indiana Jones and the Lost Crusade,’ helps to popularize the site.