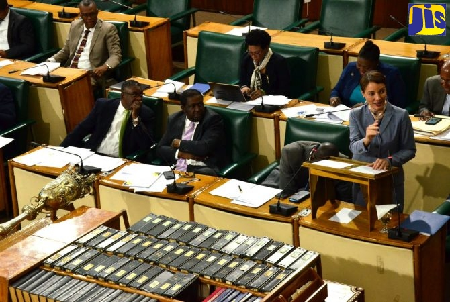 The Senate has approved the amended Road Traffic Act, which has new offenses, larger fines and harsher penalties for motor vehicle operators who breach the law.

Leader of Government Business in the Senate, Hon. Kamina Johnson Smith, who piloted the Bill through the Senate on December 7, said too many lives are being lost on the roads, due to “bad driving practices,” and a signal is being sent that offenders will no longer get away with “light fines.”

“We have to take hold of this culture of indiscipline and bad drivers must be called to answer for their wrongs. If we do not fix the system that allows them to hide from the law and have fines that are light, then they will operate with impunity,” the Senator told the Upper House.

She added that the new legislation is not targeting taxi operators or any particular sector, or even to generate revenue.

“It is to ensure that all road users can be safe, where persons in charge of vehicles operate in a responsible manner. The amendments are about law and order, and about the safety of people,” she emphasized.

Some of the offenses for which heavy fines will be imposed include driving without the required motor vehicle insurance coverage ($20,000); driving a motor vehicle without being the holder of a permit or driver’s licence ($40,000); failure of a driver to obey the traffic light ($24,000); loud noise within silent zones and failure to wear a protective helmet ($5,000); failure to comply with traffic signs ($10,000); and failure to stop at a pedestrian crossing ($12,000).

The Bill was passed in the House of Representatives on November 13, with six amendments.

Senator Johnson Smith urged drivers who pay scant regard to the law to “get ready for a new day,” as no longer will they be able to ignore tickets issued by the police.

She reiterated that when drivers and motor vehicle owners seek to relicense their vehicles and do other business if they have unsettled tickets, they will not be able to do so.

“We feel confident that the new approach has been rigorous, and it is going to take us to the right place, where discipline and law and order will reign on our streets,” she said.

Senator Johnson Smith pointed out that the Ministry of Transport and Mining held several meetings with transport associations to explain aspects of the new law, and to hear their concerns.

She noted that these will be considered for the accompanying regulations that will come into effect within three to four months.