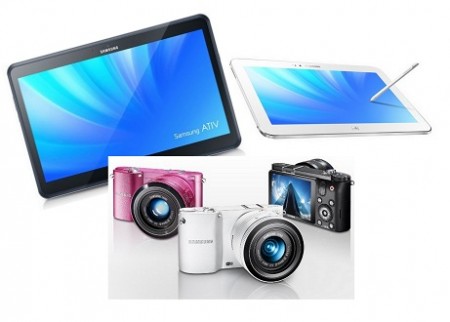 The non-stop unveiling of new gadgets in the marketplace by the South Korean electronics company Samsung has marketers and tech writers talking and writing constantly while at the same time keeping consumers smiling.

Today, the company’s market offering is like an “eat all you can eat buffet.” In their latest product launch, they showed off a few of their latest gadgets which include new cameras, tablets, and smartphones.

Among their impressive lineup of products is:

This is viewed as versatile and easy to use. It boasts cutting edge optical performance with connectivity capabilities and a galaxy of applications based on Android eco-system.

“The Galaxy NX reflects the unique needs of a user who needs to take professional photos and share them immediately in any situation. For those who want to express themselves and the exciting moments that make up their lives quickly, easily and on the go, the Galaxy NX is an ideal choice,” said Myoung Sup Han, Senior Vice President and Head of the Digital Imaging Business, Samsung Electronics.

However, in a rather tepid review of the product on cnet.com, the editor notes, “If you crave the connectivity offered by the Samsung Galaxy camera but don’t want to sacrifice image quality or photo capabilities, you are the poster child for the Samsung Galaxy NX.”

In addition, there has also been expressed reservation regarding the location and use of microSD card in the camera.

Another of its latest offerings is the Ativ Q tablet. This gadget comes in at 13.9mm and weighs just under 3 pounds. It runs an Intel Core i5 processor and Intel HD Graphics 4400, has 4GB DDR3L, a 128GB SSD, a 720p HD camera, and up to 9 hours of battery life.

It boasts an astonishing 3,200×1,800-pixel resolution. “Users will not only get access to Android apps via Google Play but will also be able to transfer files to share folders and files from Windows 8 to Android, truly marrying the mobile and PC experiences,” Samsung said.

The Ativ 3 is an addition to Samsung’s new product line. It is touted as the “world’s thinnest windows 8 tablet.” It weighs 1.2 pounds and measures only 0.32-inch thick. It is 10.1-inches in length and uses the full version of Windows 8 and runs on an Intel Atom processor.

The dual-core Atom processor is paired with 2 GB of memory, with an additional 64GB of onboard flash storage. It also offers a microSD card slot, thus allowing for an additional 32GB storage space.

The design closely mimics that of the Samsung’s Galaxy Android tablets.  In addition to windows, the Ativ Tab 3 also features SideSync, which allows users with Samsung phones to share data. It also supports the S Pen – Samsung’s proprietary’s stylus.

Notwithstanding, a number of banks have cut their forecasts for Samsung and the company have seen its share drop by nearly 14% since June 4. The less than stellar outlook by bankers is attributed to fears that the company’s flagship Android device, the Galaxy S4 was not keeping pace with predicted sales and rising competition from Chinese companies may be the company’s Achilles’ heel.