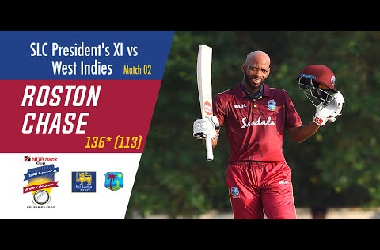 Roston Lamar Chase, the 28-year-old Barbadian and Windies cricketer, has been named the new Vice-Captain for the West Indies Test team to tour New Zealand.

Chase, the tall, batting allrounder, won a place in West Indies’ Test team after strong showings with both bat and ball in the 2015-16 Professional Cricket League.

He made his Test debut vs. India at Sir Vivian Richards Stadium, Jul 21, 2016, and has not looked back since.

He continues to perform in the team with both bat and ball.

In the 2016 Test series against India in the Caribbean, he became only the fourth West Indian, after Denis Atkinson, Collie Smith, and Sir Garfield Sobers, to take a five-wicket haul and score a hundred in the same Test match.

Though unexpectedly named for the new position, the ace allrounder reportedly said he planned to seize the opportunity with both hands and use it to pivot him to greater performances.

According to press reports, Chase will replace his compatriot and long-serving opening batsman Kraigg Brathwaite in the position for the Test series against the Black Caps.

“When I got the call from head coach Phil Simmons, he told me that he had a chat with the selectors and the board, and they agreed that I was the player for the vice-captaincy role for the tour,” Chase reportedly said.

Chase has shown resilience and patience in his short cricket career thus far, and his new leadership responsibility should serve Windies well.