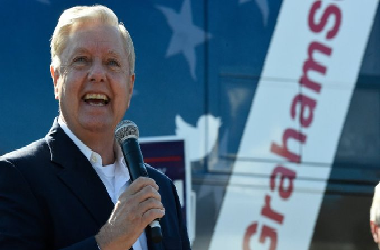 After fending off the most formidable challenge of his political career, South Carolina’s Republican Senator Lindsey Graham was in a gleeful mood.

He mocked pollsters who predicted that Joe Biden was going to win the U.S. presidential election, as he held onto his seat in South Carolina.

The Senator, who is also the chairman of the Senate’s Judiciary Committee, has been a vigorous defender of President Trump.

“He’s gonna win. To all the pollsters out there, you have no idea what you’re doing,” Graham said.

He also said that the liberals in California and New York had wasted their money.

And he asserted that this is the worst return on investment in the history of American politics by liberals.