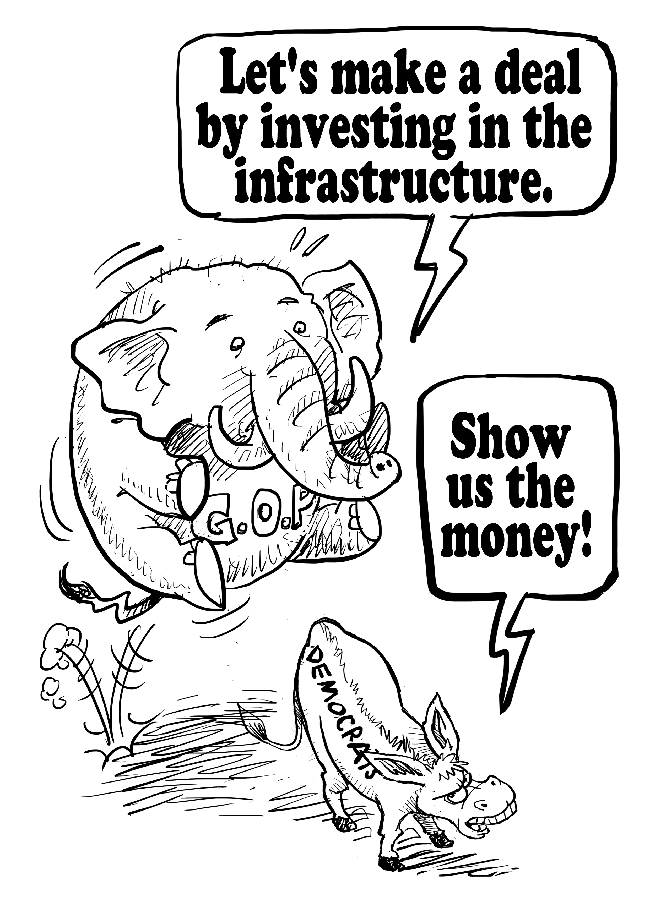 It’s a foregone conclusion that the U.S. infrastructure is falling apart and is way below the standard of most developed countries.

President Obama, during his time in office, appealed to the Republican leadership back then for a deal on investing in the infrastructure.

However, he was rebuffed time and again on the premise that the deficit was growing too large, and future generation should not be made to pay for incurring such a debt.

The following were some of the headlines that greeted one at the time:

The truth is the Republicans, at the time, offered little cooperation and set up all the barriers possible to thwart every move of the Obama administration to gain political mileage for themselves.

Obama was forced to retreat by uttering the following:

“Unfortunately, what we’re seeing right now is a failure to invest in education and infrastructure and research and national defense — all the things that we need to grow, to create jobs, to stay at the forefront of innovation, and to keep our country safe.”

In fact, during the Obama administration, the Republicans in Congress shut down the government and threatened to default on the debt citing an out of control deficit.

Also, back then, when President Obama was drafting the budget, the same Republicans were arguing that the national debt threatened the well-being of not only our children but also our children’s children.

They viewed the deficit reduction back then as sacred.

Now, Republican President Donald J. Trump rolls into town and claims he wants to tackle infrastructure next — and he wants the Democrats’ help.

“At some point, and for the good of the country, I predict we will start working with the Democrats in a Bipartisan fashion,” he tweeted recently. “Infrastructure would be a perfect place to start. After having foolishly spent $7 trillion in the Middle East, it is time to start rebuilding our country!”

During the 2016 campaign, Trump promised to introduce a $1 trillion infrastructure plan in his first 100 days.

Now, more than a 100-day later, there is no plan in place since the time was spent primarily on multiple immigration orders, failed attempts to repeal Obamacare, and rolling back Obama’s regulations across various business sectors.

That said, the Republicans discounted their sacred cow — the deficit and were able to pass a $1.5 trillion tax cut bill to benefit corporations and the rich.