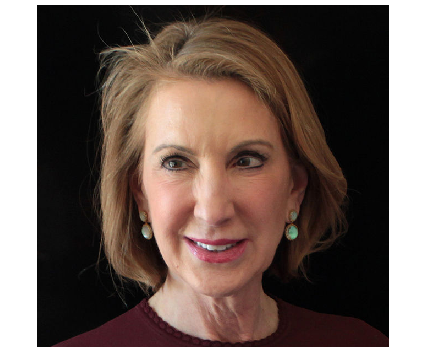 Carly Fiorina, former CEO and chair of the board of Hewlett-Packard, now politician is seeking a place at the table not only as a presidential candidate but also to get to the debate stage.

In order to get to the debate stage set for Aug. 6 in Cleveland, Fiorina will first have  to beat out a number of her fellow Republicans contenders to be among the top 10 of an aggregate of national polls — a standard set by Fox News.

The only woman in the GOP contest, Fiorina reportedly told members of the Faith & Freedom Coalition that she is in a unique position to attack the likely Democrat nominee, Hillary Clinton.

Clinton must not be president, Fiorina told the supportive crowd, because “she is not trustworthy — she lacks a track record of leadership.”

In a past biting critique of Fiorina stewardship at Hewlett-Packard, Jeffrey Sonnenfeld of Yale University at the time labeled her “the worst (CEO) because of her ruthless attack on the essence of this great company,” in USA TODAY.

He added, “She destroyed half the wealth of her investors and yet still earned almost $100 million in total payments for this destructive reign of terror.”

However, ignoring her past Fiorina reportedly said, “I’ll make it clear that I’m ready to take on Hillary Clinton.”

“But I need your help to get on that debate stage. In order to secure an invitation, I need to grow my team of supporters.”

Speaking to the group of social conservatives, Fiorina talked about her relationship with Jesus Christ and the need for faith in public life as well as domestic and foreign policies.