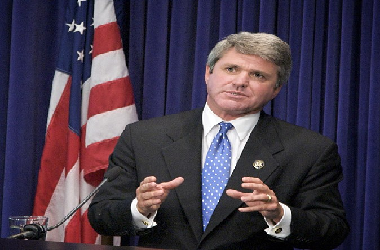 Rep. Michael McCaul (R-Texas) has argued that the U.S. withdrawal from Afghanistan has emboldened Russia in its ongoing conflict with Ukraine.

In an interview on CNN’s State of the Union, McCaul told host Jake Tapper the key to preventing a Russian invasion into Ukraine is deterrence.

“But I’m not seeing a lot of deterrence,” McCaul said. “I’m seeing some tough rhetoric, but not a lot of action. I would recommend — I talked to Deputy Secretary Wendy Sherman prior to her negotiations — that you have to put things on the table like sanctions. You have to talk about more arms sales, weapon sales to Ukraine.”

McCaul, a high-ranking member of the House Foreign Affairs Committee, said the U.S. needed to project strength after its “moment of weakness” last year when President Biden withdrew troops from Afghanistan and the Taliban quickly took control of the country.

He noted that history has taught us that when a country shows weakness it invites aggression.

“So, we are not projecting strength, as Reagan talked about, but, rather, projecting weakness, which, historically, going back to Hitler and Chamberlain, always invites aggression,” McCaul added. “And I think you’re going to see a lot more of it.”