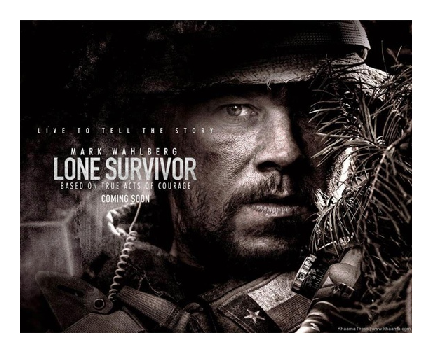 Reading movie reviews or listening to someone giving feedback on a movie he or she has watched is not only interesting in of itself but also can be telling in how different and varied people’s perception can be.

Kenneth R. Sample writing on the website www.reasons.org has an interesting take on the movie, Lone Survivor. He writes thus: I’ve seen most of the war movies made over the last seventy years (see “Ken’s Top 50 World War II Films”). I rank Band of Brothers, the 10-part miniseries produced by Steven Spielberg and Tom Hanks about the real-life heroism of Easy Company as the very best. The recent film Lone Survivor has elements that remind me of the things I appreciated about Band of Brothers. Without giving away the storyline of Lone Survivor, let me simply list some of the things I appreciated about the film. (Editor’s note: movie was released earlier this year.)

I give the movie a 10-out-of-10 and highly recommend people go see it. Though keep in mind, this is an intense film filled with realistic combat violence and blue language common among elite fighting men.

In closing, when I think of America’s noble warriors I’m reminded of Jesus’s words in John 15:13 (ESV), “Greater love has no one than this, that someone lay down his life for his friends.”