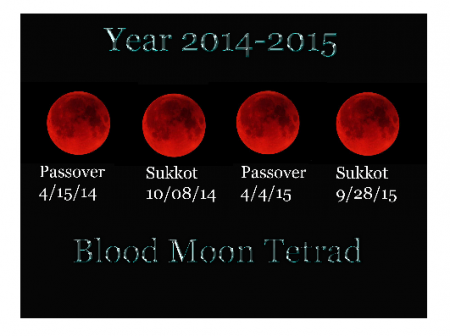 The sun will be turned to darkness and the moon to blood before the coming of the great and dreadful day of the Lord. ~ Joel 2:31

A prophecy that has been predicted throughout the ages and has occurred 7 times between the first coming of Christ and the year 2013.  On April 15, 2014, this phenomenon will present itself again.  At 1:20 am a lunar eclipse followed by the first in a tetra d (set of four) blood moons will occur.  This event will happen again on October 8, 2014.  In 2015, the blood moons will appear twice more to complete the series of four on June 8 and September 28.  Each will follow six full moons with no partial eclipses between the lunar events.

I’m sure some of you are wondering if the blood moon is what it sounds like. The answer is yes.  The blood moon is a full moon that appears to be the reddish brown color of partially dried blood.

To many people of religion, these coming events foretell of the second coming of Christ.  Some rumors even speculate that Jesus will return to claim his bride.  The coming of the four blood moons is said to be a sign of judgment upon the world that will herald a devastating war as predicted by the prophet Ezekiel.  While some may laugh at this theory, there is documentation of major world events that significantly affect the Jewish community that occurs with either the first or last of the blood moons, including the Jewish exile from Spain.  It’s also a little curious that the first blood moon will occur during Passover, a significant day in the Jewish faith. Although, to date, we are still missing the massive and devastating earthquake that is also included in the foretelling of the end of time.

Next, we turn our attention to the scientific view.  As the earth shifts to shield the moon from the sun, the sunlight refracts as it passes through the Earth’s atmosphere and the many particles of dust floating in the wide open space. As the light reflects on the moon, it casts a bloody veil across the lunar being.  Anyone who has ever seen a flaming red sun settling behind the horizon has seen this happen before. The moon should appear its usual soft white/yellow color as the eclipse approaches.  As the shadow of the Earth passes across its face the color should shift to a reddish orange or a reddish brown.  It really depends on where a person is standing in relation to the night sky.

Is this really a simple trick of the light or is the world truly coming to an end?  That remains to be seen.  Regardless, if you’re a night owl, grab your binoculars and step outside next week to witness the beautifully chilling appearance of the Man in the Moon.  For all of the planetary buffs, pay close attention to the fiery red star shining brightly beside the blood moon.  That’s the planet Mars (conveniently named after the Roman God of War) joining the party.