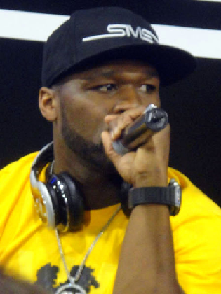 Curtis James Jackson III, better known by his stage name 50 Cent, was in a spot of bother after performing to a good crowd response at a concert in St. Kitts and Nevis on the weekend.

The rapper was charged for using profanity during his set on Friday at a music festival.

According to TMZ, the cops moved in and arrested the artist after his on-stage performance.

The artist was reportedly charged for using the word “mother—–” which is not permitted in the country.

A number of countries in the Caribbean have taken a strong stance against artists using profanity on stage.

It is reported that the rapper was warned to cease and desist from using any form of profanity on stage.

According to reports, the rapper’s bail was set at less than $400.

However, the entertainer has to remain in St. Kitts and Nevis until the courts reopen on June 27, at which time he’ll be required to pay the fine for his crime.

DMX, another American rapper, was charged in 2003 for a similar offence at the music event.