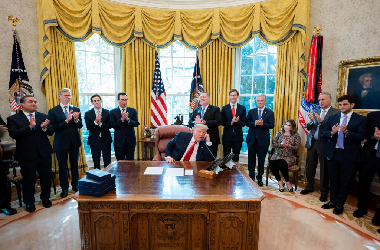 “HUGE win today for the United States and for peace in the world. Sudan has agreed to a peace and normalization agreement with Israel! With the United Arab Emirates and Bahrain, that’s THREE Arab countries to have done so in only a matter of weeks. More will follow!” — was how President Trump parsed in a tweet, the agreement between Sudan and Israel to normalize relations.

However, the agreement was denounced by Palestinians as a “new stab in the back”.

“The leaders agreed to the normalization of relations between Sudan and Israel and to end the state of belligerence between their nations,” a joint statement issued by the three countries read.

Trump added that he expects the Palestinians and other nations, including Saudi Arabia, to also agree to closer ties with Israel in the coming months.

“This will be the third country where we’re doing this – and we have many, many more coming,” Trump said.

Khartoum is now the third Arab government to normalize relations with Israel in the last two months, after the United Arab Emirates and Bahrain.

Meanwhile, political factions in Sudan have rejected the government’s decision to normalize relations with Israel, with officials saying they will form an opposition front against the agreement.

A statement from Sudan’s Popular Congress Party, the second most prominent component of the Forces of Freedom and Change (FFC) political coalition, said Sudanese people are not obligated to accept the normalization deal.

“We see that our people, who are being systematically isolated and marginalized from secret deals, are not bound by the normalization agreement,” the statement said.

“Our people will abide by their historical positions and work through a broad front to resist normalization and maintain our support for the Palestinian people in order for them to obtain all their legitimate rights.”

People have also turned out on the streets in the capital Khartoum to protest the agreement.