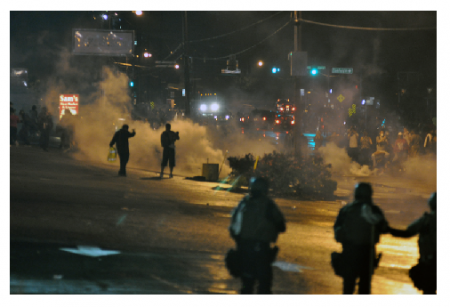 There are things we do that contradict us in the end. They point us to an anomaly in how we think and act. However, not all the ramblings of a Monday morning quarterback are crystal clear in the turgid play of an illegal hold or even benign pass interference. We don’t have the benefit of a replay in many cases, so it’s hard to say what should have been done or who is to be blamed when a lifeless youth, whose only crime is insolence, is full of lead.

An investigation will commence and predictably the officer believing his life to be in danger will be ruled to have acted lawfully. So move along folks, there is nothing here to see. I disagree. The issue should not have been ` the drama of the skid and crash`, but how it came to be that the promise of a caring nation have been hijacked and shown to be a `slick` road.

Let me explain this thought. Have you ever been to a high school graduation and watch which parents shout `Hallelujah! ‘or `Thank you Jesus!’ when their child`s name is called? These charged intonations tell a story of parental gallantry, even selfless sacrifice of teachers and guidance counselors, but it speaks volume about the `seeming` absence of policy support. We are graduating kids who are average in what they know, but who have not felt the empowerment that translate into confidence and passion, from what they see and feel in words and deeds: `that this country will not only make them promises but will keep them too`.

In the end, it matters not what is taught or even how, if our greatest assets are not invested or made to feel invested and empowered in their own fight for economic survival and dignity, more so respect and justice. When young people feel frustrated or overwhelmed in their struggles or the `Hallelujah`at the high school graduation signals the end of their expectations, it’s not just `Houston……., its America, we have got a problem`.

Enter our men in blue, our finest armed with learned and assumed profiles and stereotypes of who is a danger to society. What was at best a phantom threat and both men’s defense of their misplaced masculinity, has left one dead and destroyed the other. It is absurd to conclude from all that’s wrecked that an unnecessary shooting can ever be justified homicide. At worst, it should have been a delayed ticketed infraction.

This is the fact. Our attitude towards our stated concerns for a more just union is languishing, knee deep in fear and inadmissible prejudice that may be more subconscious than declared. When grown men perceive a threat, we have two options, respond with careful evidence based facts which lead to confidence, or cover our inadequacies and frustrations with belligerence. Pretty much become the bull in the china shop. The latter leaves skid marks to the awful crash and plenty soon will be repeated with the usual alarm. However our alarm contradicts us. For there are policies and budgets crafted by city councils, county supervisors, along with state and federal officials, balanced on the misfortune and anxieties of the economically stressed that funds the city and generate jobs for a booming prison industry and before long, many high school students don’t, or can’t stay clean enough to be able to graduate and have their parents shout that chilling `Hallelujah!`

Confidence is not a physical thing. Robbed a man of it, and you can get a malleable low cost worker, with or without the silent screaming tattoos and low hanging pants. Or a degreed professional who can analyze and Monday morning quarterback but can’t design a playbook to avoid a senseless tragedy. Our young charges are looking on and are not so sure America has got their back.

This should be the issue around which we fashion our debates. One set of low expectations becoming worryingly fulfilled, belligerence and prejudice facing off in our streets, and laws crafted to appease fear and enforced on stakeholders who have lost faith in the promise that is America. Law and order at the point of a gun is a misnomer, no matter who points the gun, or craft the legislations. It is an anomaly. The disconnect is with our city councils, county supervisors and state officials who have bought into a `tough of crime` line which was and is pretty much malarkey, as Joe Biden, in plain spoken English, often says. On the contrary, being smart and respectful, plus making sure our promises to each other is sacred, is a better way. The difference between a wasted life and regret for what might have been, is confidence. Nothing more, nothing less.

We can say `Amen` to the promise of our Bills of Rights or become rubberneckers at the predictable crashes, whether in Ferguson Mo., or the institutionalize `stop and frisk` often in the news in New York.

It`s hard to swerve and protect at the same time, especially for dedicated men in blue. To focus on who is or was the rouge when the policy worked as designed is to pull the wool over our own eyes, and feigned we are shocked. And leave the architects safely in their gerrymandered seats?