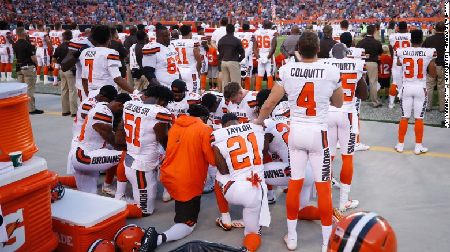 Historically, symbols have played an important part or role in a country’s cultural development.

Additionally, symbols are often rallied around as part of the celebrations of patriotism and are designed to be inclusive and representative of all people of the national community.

Now, fast forward to the ongoing tiff between some U.S. professional athletes who have stoutly refused to stand at the singing of the National Anthem and President Donald Trump who takes exception to their action.

The President has called for the punishment of the athletes as he views their behavior as disrespectful and dishonorable.

“Courageous Patriots have fought and died for our great American Flag — we MUST honor and respect it! MAKE AMERICA GREAT AGAIN!,” tweeted the President.

Soon after, he again tweeted: “Sports fans should never condone players that do not stand proud for their National Anthem or their Country. NFL should change policy!”

The athlete’s protest began after quarterback Colin Kaepernick started the kneeling protest in 2016 as a player with the San Francisco 49ers.

Kaepernick has refused to stand for The Star-Spangled Banner — the National Anthem — to put a spotlight on the treatment of black people by police.

Other athletes soon followed, thus creating a bangarang in the country, made worse by the President’s call for the firing of the athletes.

Some people have sided with the President in condemning the athletes’ action while others dare the President not only to intervene but also view his call as one of trying to shut down free speech.

That said, the athletes may have serendipitously started something new that the President and civil society may want to give serious thought and take on board.

Afterall, kneeling is also symbolic as demonstrated by religious folks globally and may even be a better gesture or symbol than standing to show respect for the national anthem.

So, as one moves into the 21st century with the various changes, kneeling and all that it symbolizes may just be one of the new changes that officialdom should consider for adoption.

Moreover, if push comes to shove, the national anthem could be made a binary affair — standing and kneeling.