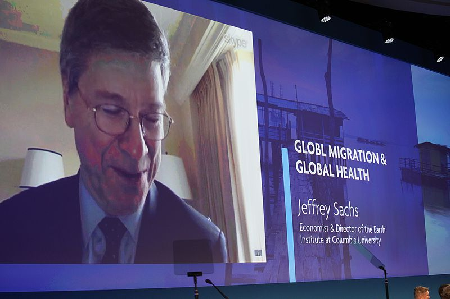 Professor and Director of the Center for Sustainable Development at Columbia University Jeffrey Sachs has viewed the Donald Trump and Republican-led trillion dollars or more tax cuts as one that is not only unaffordable but also brainless.

He noted that the tax cut will only serve to benefit the richest Americans and left the poor and struggling working class at a distinct disadvantage.

He further posited the view that despite the analyses by the Congressional Budget Office (CBO), the Joint Tax Committee, and most independent experts, the Republican Party leaders were hell-bent on getting a Tax Bill passed.

The learned professor argued that findings by experts have shown that the bill lends to a reduction in healthcare coverage for over 13 million poor Americans, negative long-term economic effects, and a huge increase in the public debt.

Additionally, Professor Sachs posited the view that the tax cut is partly driven by the Republican Party’s mega-donors and special interest groups.

“This is a cabal that long ago gave up any interest for mainstream Americans, much less for the down and out,” the professor noted.

Furthermore, he lamented the fact that the public debt has already increased from 39% to 77% of Gross Domestic Product (GDP) in 8 years and ought not to be discounted.

Sachs questioned the approach in passing such a momentous legislation without any support from the Democratic Party and wondered whether the Democratic system is not being undermined.

He noted further that the U.S. is in a dire political strait and moreover has become a danger to itself and the world with its shortsighted self-interest as well as lack of consideration for the common good.

“The world looks on in fear and astonishment,” opined the professor.