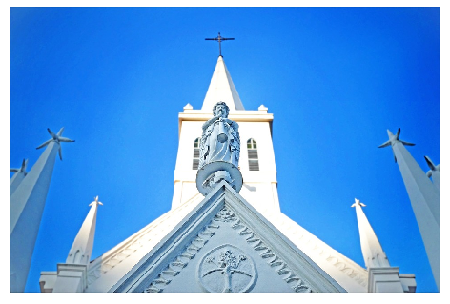 A Philippine Catholic Church priest riding his hooverboard in church may appear cool to the millennial generation and outsiders, but not so to the people of this predominantly conservative society.

The priest gained notoriety after his ride on wheels in church was caught on camera during the celebration of Christmas Eve Mass.

The picture went viral on social media, and the Church has subsequently apologized after what it considered to be an indiscretion by the priest.

The “hip hop” priest dressed in a white cassock was reported as singing a Christmas song while riding a self-balancing electric scooter between packed pews.

The diocese of San Pablo said the priest rode the hoverboard inside his Miraculous Medal church in the town of Binan, about 30 kilometers (19 miles) south of Manila, “as a way of greeting his parishioners”.

“That was wrong. The Eucharist demands utmost respect and reverence… it is the Church’s highest form of worship,” the diocese said.

According to an AFP report, the Catholic Bishops Conference of the Philippines named the priest as Father Albert San Jose.

It also said in a statement to the press, “It is not a personal celebration where one can capriciously introduce something to get the attention of the people.”

The priest has also reportedly said that it was a wake-up call for him and also acknowledged that his action was not right and promised that it will not happen again.

“He will be out of the parish and will spend some time to reflect on this past event,” according to the statement.

He also offered an apology.

The Philippines has a population of 100 million people of which 80% shares the faith of the Catholic Church. It is also the only state outside the Vatican to ban divorce.