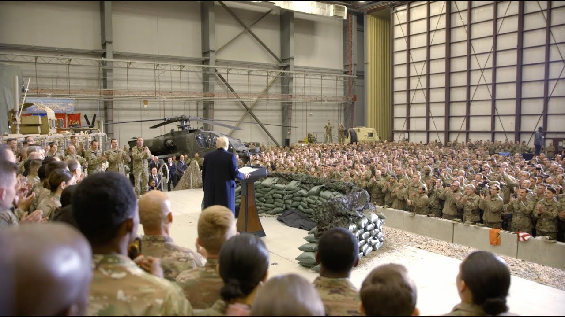 President Trump paid an unannounced visit to Afghanistan to celebrate the Thanksgiving holiday with U.S. troops.

The President expressed gratitude to the troops for their tremendous sacrifice and significant service to both the U.S. and Afghanistan.

During the visit, the President met with Afghanistan leader President Ashraf Ghani, posed for photos, and served turkey to the troops. It was President Trump’s first trip to the country since assuming office three years ago.

In a speech laced with accolades and brash braggadocio, Trump noted the strength of the U.S. Army and its rebuilding since he assumed office.

“There’s nowhere I’d rather celebrate this Thanksgiving than right here with the toughest, strongest, best, and bravest warriors on the face of the Earth. You are indeed, that. You know, when I took office — if you can believe it, almost three years ago — we were very depleted. Our military was depleted in terms of equipment. You see, right? They were all shaking their heads. That’s right. We have all those brand-new planes and brand-new helicopters and brand-new ships being built now: Brand-New, incredible submarines. Probably the most powerful submarines — probably the most powerful weapon in the world, is what we’re building, in the form of submarines. Nobody’s — nothing is even close.”

He said the U.S. has allocated “$2.5 trillion — very close to that number,” in military spending.

“Nobody beats our great Army, Navy, Air Force, Coast Guard, Marines. And we think, soon, we’re going to be adding a thing called “space” — you know about that, right?” the President said.

Trump also boasts, “we have the greatest economy anywhere in the world.”

“Our stock market has reached the highest level ever in the history of the exchanges — all three if you look. All three. It’s incredible. It’s incredible, what’s happening,” said the President.

He also touted the success of killing Al-Baghdadi, the organizer and founder of ISIS.

“The animal known as al-Baghdadi — the founder, the leader of ISIS, the man that was trying to reinstitute ISIS, because we’ve defeated — we have 100 percent of the ISIS caliphate in Syria is now ours — he is dead. His second is dead. His third — we have the sights on the third. I think the third doesn’t want the job,” said Trump.

Additionally, he noted the importance of keeping the oil fields in Syria.

He also lamented the fact that Europe has not stepped up to the plate in taking prisoners back and trying them.

“We have thousands of prisoners. We’d like Europe to take those prisoners. They have not stepped up to the plate at all.”

He also said the U.S. was in talks with the Taliban, which he said, “wants to make a deal”.

Some 13,000 US troops remain in Afghanistan 18 years after the U.S. intervention to oust the Taliban following the 11 September 2001 attacks.