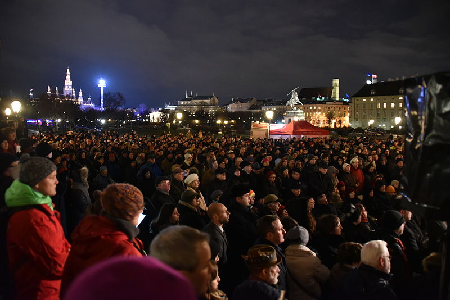 International Holocaust Remembrance Day is an international memorial day set aside on January 27th to commemorate the lives of the victims of the Holocaust.

It commemorates the genocide that resulted in the death of an estimated 6 million Jewish people, 2 million Romani people, 250,000 mentally and physically disabled people, and 9,000 homosexual men by the Nazi regime and its collaborators. It was designated by the United Nations General Assembly resolution 60/7 on 1 November 2005 during the 42nd plenary session.

President Trump in his message noted, “It is with a heavy heart and somber mind that we remember and honor the victims, survivors, heroes of the Holocaust. It is impossible to fully fathom the depravity and horror inflicted on innocent people by Nazi terror.”

The president also applauded those who risk their lives to save thousands of innocent people who were caught up in one of the darkest periods of history.

“Yet, we know that in the darkest hours of humanity, light shines the brightest.‎ As we remember those who died, we are deeply grateful to those who risked their lives to save the innocent.”

The President further said, “In the name of the perished, I pledge to do everything in my power throughout my Presidency, and my life, to ensure that the forces of evil never again defeat the powers of good. Together, we will make love and tolerance prevalent throughout the world.”

The U.N., through its Resolution 60/7 urges every member nation of the U.N. to honor the memory of Holocaust victims and encourages the development of educational programs about Holocaust history to help prevent future acts of genocide. It rejects any denial of the Holocaust as an event and condemns all manifestations of religious intolerance, incitement, harassment or violence against persons or communities based on ethnic origin or religious belief.