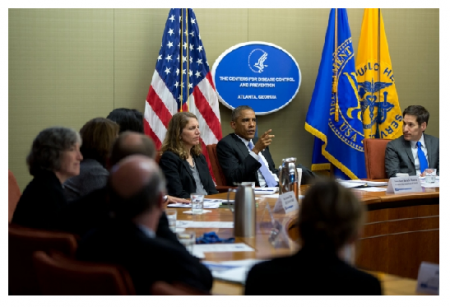 In light of the outbreak of the Ebola disease that continue to plague West African countries, President Obama has made a clarion call to world leaders to join the United States in its effort to combat the vagaries of the disease.

“Ebola is a horrific disease. It’s wiping out entire families.  It has turned simple acts of love and comfort and kindness — like holding a sick friend’s hand, or embracing a dying child — into potentially fatal acts. If ever there were a public health emergency deserving an urgent, strong and coordinated international response, this is it,” declared the President.

He also noted that the public health systems in Sierra Leone, Liberia, and Guinea have collapsed, making the outbreak a regional and potentially global threat. Health workers on the front lines are in desperate need of more aid – from beds, to supplies, to more helping hands.

The President bemoaned the fact that although some progress have been made, the world community is not moving fast enough to help arrest the problem faced by the affected countries.

He further noted that the U.S. is working with Sierra Leone to create an air bridge that will get health workers and medical supplies to the region faster, as well as setting up new treatment centers, a field hospital, and a training facility to help bolster the number of health workers on the ground.

“Right now, everybody has the best of intentions, but people are not putting in the kinds of resources that are necessary to put a stop to this epidemic. There is still a significant gap between where we are and where we need to be. We know from experience that the response to an outbreak of this magnitude has to be fast and it has to be sustained.  It’s a marathon, but you have to run it like a sprint. And that’s only possible if everybody chips in, if every nation and every organization takes this seriously. Everybody here has to do more,” said the President.

He further said, “International organizations have to move faster, and cut through red tape and mobilize partners on the ground as only they can. More nations need to contribute critical assets and capabilities — whether it is air transport, or medical evacuation, or health care workers, or equipment, or treatment. More foundations can tap into the networks of support that they have, to raise funds and awareness. More businesses, especially those who already have a presence in the region, can quickly provide their own expertise and resources, from access to critical supply chains to telecommunications. And more citizens — of all nations — can educate themselves on this crisis, contribute to relief efforts, and call on their leaders to act.”

“Do not stand by, thinking that somehow, because of what we’ve done, that it’s taken care of,” the President said to the gathered nations. “It’s not. And if we don’t take care of this now, we are going to see fallout effects and secondary effects from this that will have ramifications for a long time, above and beyond the lives that will have been lost,” he concluded.