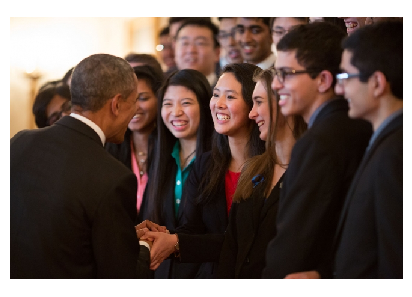 President Obama bats once again for students in his weekly address as he laid out his vision for quality, affordable higher education for all Americans.

He noted that in an economy that is driven by technology and innovation the most important skill that one can sell is education. He also posited that more than ever the surest ticket to the middle class and beyond is through affordable higher education.

He again bemoaned the cost of higher education and the massive debt students are left with at the point of graduation.

He declared that his Administration has worked hard to make college more affordable by expanding tax credits,  increasing Pell Grants, as well as implementing the largest reform to student loan programs in history.

Moreover, he said he has fought to keep interest rates on student loans low and has acted to let millions of graduates cap loan payments at 10 percent of their income, so they don’t have to choose between paying the rent and paying back their debt.

“I’ve sent Congress my plan to bring the cost of community college down to zero – because two years of higher education should be as free and universal as high school is today,” said the President.

He further made an appeal for everybody including elected officials, universities, and business leaders  to all make a concerted attempt in helping to bring the cost of college education down.

He also argued for an added and a viable new path based on values rather than cash or bureaucracy.

“It doesn’t involve any new spending or bureaucracy.  It’s a simple declaration of values – what I call a Student Aid Bill of Rights.  It says that every student deserves access to a quality, affordable education.  Every student should be able to access the resources to pay for college.  Every borrower has the right to an affordable repayment plan.  And every borrower has the right to quality customer service, reliable information, and fair treatment, even if they struggle to repay their loans,” he explained.

He further noted that if stakeholders buy into these few simple principles it could make a meaningful difference for college students.

“In America, a higher education cannot be a privilege reserved for only the few.  It has to be available to everybody who’s willing to work for it,” concluded the President.