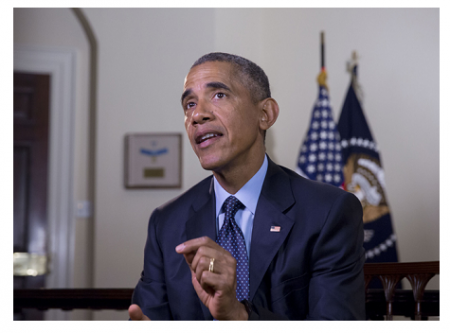 President Obama in his weekly address reinforced the mission of his administration to destroy ISIL.

He said however that this remains a difficult fight and also cited the situation in Syria and Iraq as being incredibly complex.

He noted that ISIL is not only entrenched in urban areas, but it uses innocent civilians as human shields.

He said, however, despite these challenges he can report that his administration has made tremendous progress.

He also said that he had directed his team to continue accelerating their campaign on all fronts.

“Our 66-member coalition, including Arab partners, continues to grow stronger.  More nations are making more contributions.  Every day, our air campaign—more than 10,000 strikes so far—continues to destroy ISIL forces.  And we continue to go after ISIL leaders and commanders—taking them out, day in, day out, one after another after another,” the President said.

The President explained that in Iraq ISIL has now lost more than 40 percent of the areas it once controlled and a coalition of local forces in Syria is tightening the squeeze on ISIL’s stronghold of Raqqa.

“We bomb its oil infrastructure, ISIL’s been forced to slash the salaries of its fighters.  Thanks to the work of many nations, the flow of foreign terrorist fighters into Syria finally appears to be slowing.  In short, in Syria and Iraq, ISIL’s territory is shrinking, there are fewer ISIL fighters on the battlefield, and it’s harder for them to recruit and replenish their ranks,” the President said.

He posited that the only way to deal ISIL a lasting defeat is to end the civil war and chaos in Syria upon which ISIL thrives.

The President noted that a cessation of hostilities in the civil war is scheduled to take place soon, but his administration was under no illusions that the problem was one that will be solved overnight.

“There are plenty of reasons for skepticism.  Even under the best of circumstances, the violence will not end right away.  But everyone knows what needs to happen.  All parties must end attacks, including aerial bombardment.  Humanitarian aid must be allowed to reach areas under siege.  Much will depend on whether the Syrian regime, Russia and their allies live up to their commitments.  The coming hours and days will be critical, and the world is watching,” he said.

He said his administration will be resolute and relentless in its fight against ISIL and there will be absolutely no cease-fire with this group.

“We’ll remain relentless.  Beyond Syria and Iraq, we continue to use the full range of our tools to go after ISIL wherever it tries to take root, as we showed with our recent strike on an ISIL training camp in Libya.  With partners around the world, we’ll continue discrediting the ideology that ISIL uses to radicalize, recruit and inspire people to violence, especially online,” the President added.

He concluded that his administration will remain vigilant at home and will act against lone actors or small groups of terrorists like those in San Bernardino, which are harder to detect.

He argued that the homeland security and law enforcement professionals were hard at work—24/7 and moreover, his administration will keep working to build partnerships of trust and respect with communities to help them stay strong and resilient.

“Again, this fight against ISIL will remain difficult.  But we’ll continue to draw on all elements of our national power, including the strength of our communities and our values as Americans.  And I’m confident that we will prevail.  We will destroy this barbaric terrorist organization and continue to stand with those around the world who seek a better, safer future,” said the president.