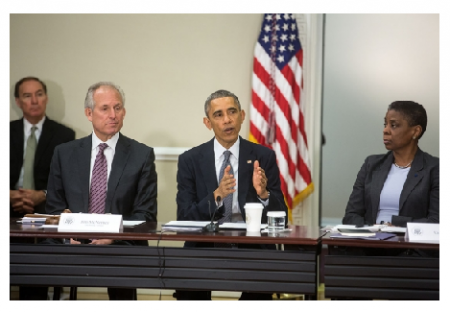 In a meeting with his Export Council, President Obama announced nearly $400 million in funding to help make American businesses and workers more competitive.

He noted that businesses added almost 11 million jobs over the past 57 months and that this year the economy created more jobs [than] in any year since the 1990s, with still a month to go.

He said that since 2010, more jobs have been created in the United States than Japan, Europe, and all advanced nations combined.

He added that one of the reasons more jobs have been created in the United States is because of exports.

The President further noted that last year U.S. businesses sold a record $2.3 trillion of Made in America goods and services. He asserted that these exports do not only support more than 11 million American jobs, but typically are jobs that pay higher wages.

“We’ve had some terrific suggestions from some of our leading businesses, but also some small businesses and medium-sized businesses who are starting to sell overseas.  The recommendations that have been generated by the Council have been implemented by our various agencies, and we’re here not to rest on our laurels but rather to continue to make a big push to sell even more overseas,” said the President.

He also said that in order to ensure that workers have the necessary skill sets, his Secretary of Labor, Tom Perez, will announce a $100 million competition to help expand apprenticeship programs across the country.

“Many of the companies around this table have helped design it or are already participating in these apprenticeship programs.  They give talented, motivated young people the chance to get an outstanding career.  They get a pathway, a door open to them that allows them to succeed and secure a position in the middle class, and it helps us recruit the kind of workers that are going to keep us competitive for years to come,” he explained.