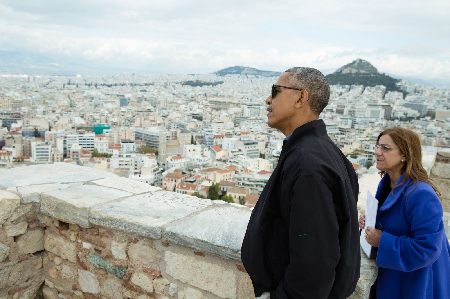 President Obama, on his visit to the Acropolis in Greece, was in a reflective mood as he stood at the birthplace of democracy during one of his final overseas trip as president.

The President noted as president one gets to visit different countries and learn about the cultures of other people.

“One of the great joys of being the president is the ability to travel and see different cultures and meet different people. That’s important for our national security but it’s also important for us to understand ourselves and our place in the world,” the President said.

He further noted that it was in Athens that so many of the ideas about democracy, notions of citizenship, and notions of rule of law were first developed.

Additionally, he said a visit to the Acropolis does not only provide a better understanding of Greece and Western culture but also sends a signal of the continuity that exists between what happened then and now.

“It’s a very important role for the President of the United States to send a signal to the world that their culture, their traditions, their heritage, their monuments, are something of value, and are precious, and that we have learned from them. Because what that does then is send a strong signal around the world that we view ourselves as part of a broader humanity and a community of nations that can work together to solve problems and lift up what’s best in humanity,” opined President Obama.