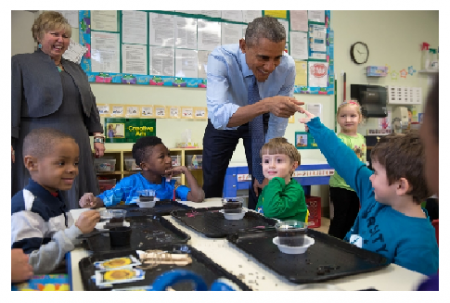 President Obama, in his weekly address, once again reminded the nation of his ideas that he has place on the table that will help working families feel not only more secure but also positioned them to earn the necessary skills sets required to advance in a world of constant change.

He noted that this is a new economy that is both knowledge and innovation based driven, therefore, at the core of a middle-class economics is how well kids are prepared for the future.

He argued that for decades money was thrown at education without making sure schools were actually improving teachers were given the correct tools with which to work and ensuring that taxpayer dollars were used effectively.  Kids too often paid the price due to lack of stewardship and proper oversight, he proffered.

He further argued that over the past few years evidence of improvement can be seen from elementary and secondary school students. He also said last year, younger students earned the highest math and reading scores on record.  And, moreover, high school graduation rate recently hit a new all-time high.

“This is progress. But in a 21st century economy, our kids will only do better than we did if we educate them better than we were educated.  So we have to do more to make sure they graduate from school fully prepared for college and a career,” he posited.

The President added that this year he wants to work with both parties in Congress to replace No Child Left Behind with a smarter law that addresses the overuse of standardized tests, makes a real investment in preschool, and gives every kid a fair shot in the new economy.

“Now, it’s pretty commonsense that an education bill should actually improve education.  But as we speak, there’s a Republican bill in Congress that would frankly do the opposite,” he stated.

He explained that at a time when there should be more invested in kids, the Republicans were busy devising plans that would lock in cuts to schools for the rest of this decade which would ultimately mean less investment in kids in 2021 than was actually done in 2012.

He further explained that at a time when teachers should be given all the resources they need, the Republican plan is to allow states and cities to shuffle education dollars into things like sports stadiums or tax cuts for the wealthy.

“At a time when we have to give every child, everywhere, a fair shot – this Congress would actually allow states to make even deeper cuts into school districts that need the most support, send even more money to some of the wealthiest school districts in America, and turn back the clock to a time when too many students were left behind in failing schools,” noted the President.

The President lamented the fact that denying a quality education to the children of working families is as wrong as denying health care or child care to working families.  “We are better than this,” he added.

He noted that in today’s world all kids must be equipped with an education that prepares them for success, regardless of what they look like, or how much their parents make, or the zip code they live in.

He argues for trying new things, investing in what’s working, and fixing what’s not.

He also pointed out that it means cutting testing down to the bare minimum required to ensure that parents and teachers know how kids and schools are doing from year to year, and relative to schools statewide.

In addition, according to the President, it means giving the teachers and principals who do the hard work every day the resources they need to spend less time teaching to a test, and more time teaching our kids the skills they need.

“Some of these changes are hard.  They’ll require all of us to demand more of our schools and more of our kids, making sure they put down the video games and iPhones, and pick up the books.  They’ll require us to demand that Washington treat education reform as the dedicated progress of decades – something a town with a short attention span doesn’t always do very well,” he argued.

“But I’m confident we can do this.  When it comes to education, we are not a collection of states competing against one another; we are a nation competing against the world.  Nothing will determine our success as a nation in the 21st century more than how well we educate our kids.  And we shouldn’t accept anything less than the best,” concluded the President.