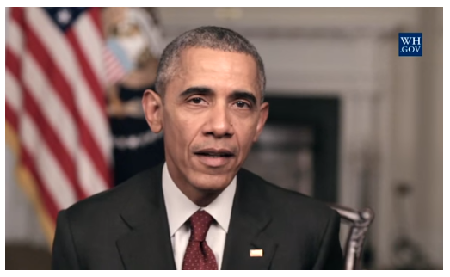 “How do we make the new economy work better for everyone, not just those at the top?” was the question posed by President Obama at the beginning of his weekly address.

The President noted that after the worst economic crisis experienced, today, there has been a significant growth in private-sector jobs.

He said unemployment rate has been cut in half, but at the same time, the U.S. economy has continued to experience profound changes that began long before the Great Recession hit.

The President argued that the changes within the economy has caused and brought about undue pressure and severe hardship on people which make it difficult for them to cope or succeed.

“That’s a big part of the reason a lot of working families are feeling anxious. And it offends our fundamentally American belief that everybody who works hard should be able to get ahead,” said the President.

He further said that this is the reason his administration is fighting hard to give families more opportunity and more security by:
Working to create more good jobs
Invest in the middle class
Help working people get a raise.

“It’s what the Affordable Care Act is all about – filling in the gaps in employer-based care so that when somebody loses a job, or goes back to school, or starts that new business, they still have health care. And it’s why I believe we’ve got to take steps to modernize our unemployment insurance system,” the President noted.

He explained that if a hardworking American loses her job anywhere in the U.S. then she should be able to get unemployment insurance and some help to retrain for her next job.

“If she’s been unemployed for a while, we should reach out to her and connect her with career counseling. And if she finds a new job that doesn’t pay as much as her old one, we should offer some wage insurance that helps her pay her bills,” said the President.

He stated that under his plan experienced workers who now make less than $50,000 could replace half of their lost wages – up to $10,000 over two years.

President Obama concluded that America is at its best when everyone is made to feel that they have a stake in the country.

“And that’s what I’ll be fighting for with every last day of my presidency,” he said.