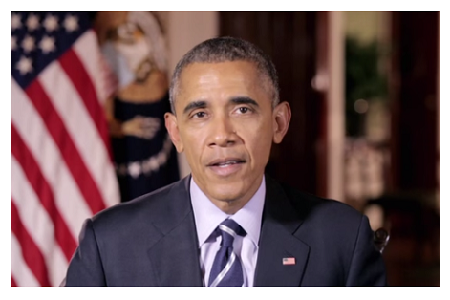 “This week, after five years of effort with eleven other nations, we reached agreement on a new trade deal that promotes American values and protects American workers,” said the President at the start of his weekly address.

“There’s a reason this Trans-Pacific Partnership (TPP) took five years to negotiate.  I wanted to get the best possible deal for American workers.  And that is what we’ve done.  Here’s why it matters,” he added.

President Obama noted that ninety-five percent of the world’s consumers live outside the U.S. borders with a demand for U.S. goods and services. He argued that this represents a large market for American businesses to capitalize on.

He underscored the huge role that exports played in America’s recovery from the Great Recession.  He said that last year a new record for American exports was set for the fifth year in a row, selling more than $2 trillion in goods and services.

“Our exports support roughly 12 million American jobs — and they’re jobs that typically pay better than other jobs,” he noted.

The President, however, lamented the fact that the U.S. was operating under outdated trade rules which put workers at a disadvantage.

“Right now, other countries can cut their costs by setting lower standards to pay lower wages. This trade agreement, TPP, will change that, holding partner countries to higher standards and raising wages across a region that makes up nearly 40 percent of the global economy.”

He stated that other countries charge foreign taxes on goods that are made in America and cited the following:

Japan — puts a 38 percent tax on American beef before it even reaches the market.

Vietnam — puts taxes as high as 70 percent on every car American automakers sell there.

“Those taxes and other trade barriers put our workers at a disadvantage. It makes it more expensive to make goods here and sell them over there,” the President declared.

The President argued that TPP will not only change this disconnect, but also eliminate more than 18,000 of these taxes on American goods and services.

He further argued that this will bring about a level playing field for American workers and businesses as well as foster rules that are fair and allow Americans to compete effectively around the world.

“Now, I’m the first person who will say that past trade agreements haven’t always lived up to their promise.  Sometimes they’ve been tilted too much in the direction of other countries and we haven’t gotten a fair deal.  And that makes folks suspicious of any new trade initiatives.  But let’s be clear.  Our future depends not on what past trade deals did wrong, but on doing new trade deals right.  And that’s what the TPP does,” the President stated.

President Obama emphasized that the TPP will include the strongest labor standards in history covering fair hours to prohibiting child labor, forced labor as well as the strongest environmental standards.

He said with the TPP, countries will have to follow the rules and therefore unable to undercut the U.S. and sell their products cheaper. He also noted that unlike past trade agreements, these standards are actually enforceable.

“Without this agreement, competitors that don’t share our values, like China, will write the rules of the global economy.  They’ll keep selling into our markets and try to lure companies over there; meanwhile they’re going to keep their markets closed to us.  That’s what’s been going on for the last 20 years.  That’s what’s contributed so much to outsourcing. That’s what has made it easier for them to compete against us.  And it needs to change,” he posited.

President Obama said, “With this Trans-Pacific Partnership, we are writing the rules for the global economy.  America is leading in the 21st century.  Our workers will be the ones who get ahead.  Our businesses will get a fair deal.  And those who oppose passing this new trade deal are really just accepting a status quo that everyone knows puts us at a disadvantage.”