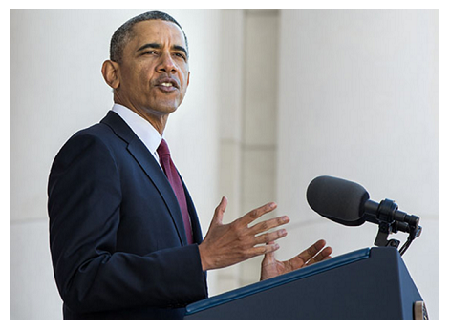 President Obama in his weekly address noted that last summer he received a letter from Elizabeth Paredes from Tucson, Arizona, a mom of a 3-year-old boy and an assistant manager at a

sandwich shop. He said she earned about $2,000 a month, and routinely works some 50 hours a week, sometimes even more. However, because of outdated overtime regulations, she wasn’t being paid a dime of overtime.

According to the President, she wrote, “It’s not easy work and requires a lot of time away from my son… at times I find [it’s] not worth it.”

“Things like the 40-hour workweek and overtime are two of the most basic pillars of a middle class life.  But for all the changes we’ve seen in our economy, our overtime rules have only been updated once since the 1970s.  Just once, in fact, forty years ago, more than 60 percent of workers were eligible for overtime based on their salaries.  But today, that number is down to seven percent.  Only seven percent of full-time salaried workers are eligible for overtime based on their income,” the President noted.

He said that his Administration has taken the step to help more workers get the overtime pay they’ve earned.

“The Department of Labor finalized a rule to extend overtime protections to 4.2 million more Americans.  It’s a move that will boost wages for working Americans by $12 billion over the next 10 years.  We’re more than doubling the overtime salary threshold.  And what that means is, most salaried workers who earn less than about $47,500 a year will qualify for overtime.  Or, their employers can choose to give them a raise so that they earn more than $47,500.  Or, if employers don’t want to raise wages, they can let them go home after 40 hours and see their families or train for new jobs.  Any way you slice it, it’s a win for working families.  And we’re making sure that every three years, there will be an automatic update to this threshold – so that working families won’t fall through the cracks for decades at a time ever again,” the President explained.

He said that this was the single biggest step he can take through executive action to raise wages for the American people.

“It means that millions of hardworking Americans like Elizabeth will either get paid for working more than 40 hours, or they’ll get more time with their families.  Either way, they win.  The middle class wins.  And America wins,” he posited.

The President concluded by stating that his Administration still has a lot more work to do to ensure the economy works for everybody, and not only those at the top. Furthermore, he said, “I’ll never stop fighting for as long as I hold this office – to restore the sense that in America, hard work should be rewarded with the chance to get ahead.”