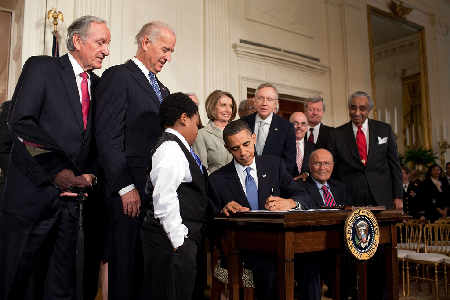 As the term of President Obama’s administration comes to an end and the Republican Party makes the repeal and replacement of the Affordable Care Act (Obamacare) the first item on their agenda upon assuming office, the president in his weekly address reminded people that they should ensure that they have health insurance for 2017.

“If you’re not covered yet, now is the time to sign up. Go to HealthCare.gov and shop for the plan that’s right for you. Like most Americans who get coverage through HealthCare.gov, there’s a good chance you’ll find a plan that costs less than $75 a month. And while the enrollment period lasts until the end of January, as long as you sign up by this Thursday, December 15, you’ll be covered starting January 1.”

He noted that his Act is based on the policy of ensuring that every American with insurance is covered by the strongest set of consumer protections in history – a true Patients’ Bill of Rights.

“You now have free preventive care, like mammograms and contraception. There are no more annual or lifetime limits on the essential care you receive. Women can’t get charged more just for being a woman. Young people can stay on a parent’s plan until they turn 26, and seniors get discounts on their prescriptions. Every American can rest free from the fear that one illness or accident will derail your dreams — because discrimination against preexisting conditions is now illegal. And since 2010, we’ve seen the slowest health care price growth in 50 years,” the President declared.

He lamented the fact that the Republican Party is seeking to destroy a health care system which he sought to put in place where everybody in the country could not only have access to health insurance coverage, but also better coverage.

He warned that all the consumer protections that Obamacare provides could now be thrown out given the Republican Party utterances and agenda.

“One new study shows that if Congress repeals Obamacare as they’ve proposed, nearly 30 million Americans would lose their coverage. Four in five of them would come from working families. More than nine million Americans who would receive tax credits to keep insurance affordable would no longer receive that help. That is unacceptable,” remarked the President.

President Obama further argued that both parties should be working together to see how best the American people can benefit from easy access to good health insurance coverage.

“We can work together to make the system even better — and one of the best ways to do that is make sure that you’re in it,” the President concluded.