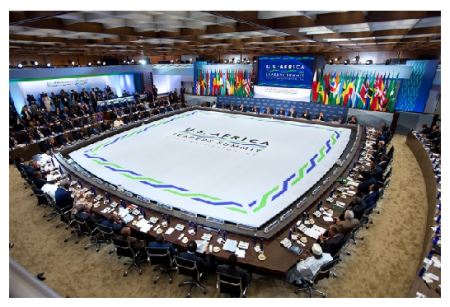 In a historic three-day U.S.-African Leaders Summit, the largest event of any held between a U.S. President and Africans heads of state and government, President Obama sought to set the context for America’s new engagement.

He made it clear from the outset that as Africa experiences continued growth, America will be a partner — “A good partner, an equal partner, and a partner for the long term.”

The President outlined three broad areas in which he thinks both America and Africa could make progress together.

First, he noted that there is an opportunity to expand trade that creates jobs. He pointed to the new trade deals and investments he announced earlier as an important step.

He said, “Today we can focus on what we can do, as governments, to accelerate that investment — economic and regulatory reforms, regional integration, and development so that growth is broad-based, especially among women, who must be empowered for economies to truly flourish.”

Second, he declared that there is the opportunity to strengthen the governance upon which economic growth and free societies depend.
“We can focus on the ingredients of progress:  rule of law, open government, accountable and transparent institutions, strong civil societies, and respect for the universal human rights of all people.”

Third, the President said, “We have the opportunity to deepen our security cooperation against common threats.  As I said, African security forces and African peacekeepers are in the lead across the continent.  As your partner, the United States is proud to support these efforts.  And today, we can focus on how we can continue to strengthen Africa’s capacity to meet transitional threats — transnational threats, and in so doing make all of our nations more secure.”

Finally, he stated, “We are here not just to talk. We are here to take action — concrete steps to build on Africa’s progress and forge the partnerships of equals that we seek; tangible steps to deliver more prosperity, more security, and more justice to our citizens.  So, to my fellow leaders, again, thank you so much for being here.  I look forward to our work together today.”