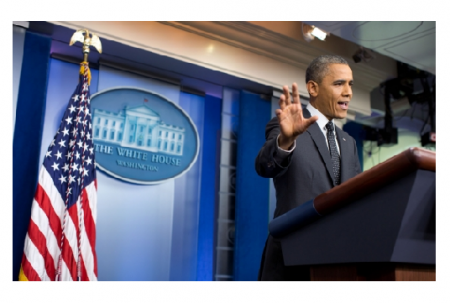 President Obama in his weekly address highlighted the fact that U.S. economy has taken a turn for the better and is now on the rebound.

He said, “Nearly six years after the worst financial crisis of our lifetimes, our businesses have added nearly 10 million new jobs over the past 53 months. That’s the longest streak of private-sector job creation in our history. And we’re in a six-month streak with our economy creating at least 200,000 new jobs each month — the first time that’s happened since 1997.”

He further applauds the decision made by his administration to rescue and rebuild the economy along with the hard work of the private sector.

“We’ve broken records for exports four years running. Last year, our exports supported more than 11 million American jobs – about 1.6 million more than when I took office. They’re good jobs that typically pay about 15% more than the national average. And more small businesses are selling their goods abroad than ever before — nearly 300,000 last year alone,” he stated.

“We should be doing everything we can to accelerate this progress, not stall it,” he further added.

The President in his address appealed to Congress to reauthorize the Export-Import Bank charter which is due to expire next month. He pointed to the important role the bank plays in creating new jobs and helping many American entrepreneurs take that next step to go global with their small business.

He said, “Past Congresses have done this [renew the charter] 16 times, always with support from both parties. Republican and Democratic Presidents have supported the bank, too. This time around shouldn’t be any different. Because the bank works. It’s independent. It pays for itself. But if Congress fails to act, thousands of businesses, large and small, that sell their products abroad will take a completely unnecessary hit.”

President Obama further explained, “Small business owners have had to overcome a lot these past several years. We all saw local businesses close their doors during the crisis. And in the past few years, we’ve seen more and more open their doors and do their part to help lead America’s comeback. At the very least, they deserve a Congress that doesn’t stand in the way of their success.”