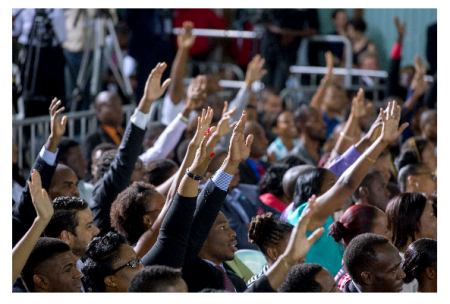 Jamaica is known as “the Land of Wood and Water” or “Jamdown.”

It is no ordinary country. Apart from its natural beauty, the country boasts a rich heritage in sport, music, literature, performing arts as well as many other cultural and artistic activities.

President Obama’s recent visit to the country was not only historical, but also inspiring to the thousands of Jamaicans who turn out to see the first and only black president in the U.S. history.

His greetings and address at the packed town hall meeting at the University of the West Indies (UWI) elicited rapturous applause from an audience made up of largely young people.

“Greetings, massive…wah a gwaan Jamaica,” so said the President as he seeks to connect with his audience with the use of the local lingua — patois.

Jamaicans, for the most part, if given a chance to respond would answer in like manner, “Nutten nah gwaan.”

Now, one could not readily blame Jamaicans for replying thus because for the past thirty years or more Jamaica’s economy has stood still and there has been little opportunity created for growth and development.

The fact is the country has been mired in debt, plagued with crime, and weighed down with high level of corruption and unemployment to the extent that one wonders whether the country will ever reclaim the lofty position it once enjoyed before independence.

Today, the country has been forced to reenter agreement with the International Monetary Fund because of the poor management of the economy by the two leading political parties.

Its current debt-to-GDP ratio is 140 per cent, one of the highest in the world.

Criminal activities are rampant throughout the country. For example, the U.S. agency, Overseas Security Advisory Council (OSAC), in 2014 reported that there were 1,193 murders, 1,227 shootings, 580 aggravated assaults, 792 rapes, 2,631 robberies, and 2,443 break-ins recorded in the last calendar year.

It also noted that Jamaica with a population of approximately 2.7 million people has a high homicide rate (44.2/100,000), which places it among the highest (per capita) national homicide rates in the world.

Moreover, Jamaica’s ranking on the corruption Perception Index (CPI) is notably poor. In the 2014 CPI, Transparency International reports that Jamaica has fallen two places from 83 out of 177 countries in 2013 to 85 out of 175 countries this year.

“The government had promised a ‘zero-tolerance’ approach to corruption. However, the promise appears to have been honored more in its breach, than in its observance,” Former Contractor General Greg Christie reportedly said in a press release.

The fact of the matter is corrupt practices by people both in the government and the private sector have held the country back as overseas investors tend to shun such business climate.

Furthermore, unemployment has been the 800-pound gorilla in the country that neither the PNP nor JLP administration has managed to arrest over the years.

The foregoing Mr. President spells “nutten nah gwaan” for the average person in the street in Jamaica.