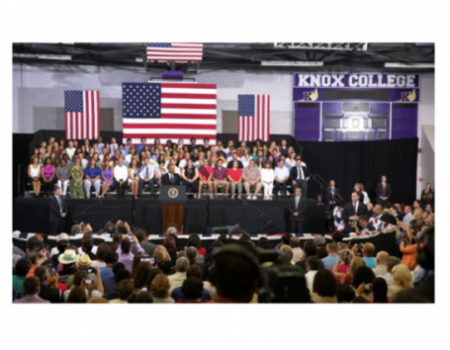 President Obama´s quest to put the middle class first may be well intentioned, but unfortunately his plans will not see the light of day unless the Republican led House of Representative is prepared to buy into it.

So, as he kicks off a series of speeches about his vision for rebuilding an economy that puts the middle class first, he will do well to remember these headlines:

Although the above is by no means an exhaustive list of the number of proposed bills put forward by his administration to have met with opposition, it indicates the hurdle he would have to contend with in order to get anything done through the House of Representatives and what is  now dubbed as a “do nothing Congress.”

Now, in the first of several speeches planned, addressing a group of mixed and cheering audience at Knox College in Galesburg, Illinois, President Obama laid out his vision for rebuilding an economy that will give the middle class a fighting chance.

In his remarks, he laid out the progress and achievement made over the five years since he took office. Some of these he argued include:

Saving of the auto industry

Changing of tax codes that favor the wealthiest

Reducing the deficit at the fast rate in 60 years.

“So thanks to the grit and resilience and determination of the American people, of folks like you, we’ve been able to clear away the rubble from the financial crisis. We’ve started to lay a new foundation for stronger, more durable economic growth. And you know, it’s happening in our own personal lives as well, right? A lot of us tightened our belts, shed debt, maybe cut up a couple of credit cards, refocused on those things that really matter. As a country, we’ve recovered faster and gone further than most other advanced nations in the world, with new American revolutions in — in energy and technology and manufacturing and health care. We’re actually poised to reverse the forces that battered the middle class for so long and start building an economy where everyone who works hard can get ahead,” he said.

He further noted, “I´m here to tell you today that we´re not there yet. We all know that. We’re not there yet. We’ve got more work to do. Even though our businesses are creating new jobs and have broken record profits, nearly all the income gains of the past 10 years have continued to flow to the top 1 percent. The average CEO has gotten a raise of nearly 40 percent since 2009. The average American earns less than he or she did in 1999. And companies continue to hold back on hiring those who’ve been out of work for some time. Today more students are earning their degree, but soaring costs saddle them with unsustainable debt.”

Looking ahead and what could possible makes his vision a nightmare, he said, “And as Washington prepares to enter another budget debate, the stakes for our middle class and everybody who’s fighting to get into the middle class could not be higher.”

“And that’s why over the next several weeks in towns across this country, I will be engaging the American people in this debate.”

Notwithstanding the foregoing, the president is already getting flack from both Republicans and media commentators for his speech as many of them view it as the same old rhetoric and Obama politicking without bringing anything new to the table.

Joe Scarborough, a former Republican Congressman, now talk show host on MSNBC, commented, “What´s the president trying to do? If he´s trying to elect Democrats in 2014, you can check that speech off, that makes a lot of sense. If he´s trying to get things done in the Washington, it´s a complete failure because it sounds like a campaign speech. Doesn´t matter whether the Republicans deserve it or not, the fact is his approval ratings are done, Congress´ approval ratings are down, Americans want things done, and pointing the finger to the other side doesn´t get it done.”

There is no doubt that this president will have a very difficult time moving his agenda forward as this Congress has proved time and again their unwillingness to play ball.