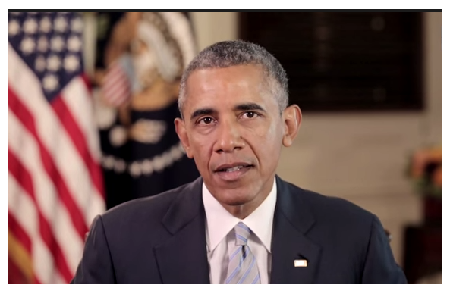 President Obama in his weekly address noted that it has been seven years now since one of Wall Street’s biggest investment banks went bankrupt; this he said triggered a meltdown on Wall Street and the worst economic crisis since the Great Depression.

He further said that the months that followed, led to millions of Americans losing not only their jobs, but also their homes, and savings they had worked so hard over the years to build.

He said, however, that there is a different story today as over the past five and a half years, the following has taken place, businesses have created more than 13 million new jobs; unemployment rate is lower than it’s been in over seven years; manufacturing is growing; housing is bouncing back.

“We’ve reduced our deficits by two-thirds.  And 16 million more Americans now know the security of health insurance,” the President declared.

He stated that this was progress and attributed it to the hard work and sacrifice of the American people.

“We remain the safest, strongest bet in the world,” he posited.

The President explained that given the current political climate, the pessimism being expressed by some politicians fits their agenda well.

However, he said, “I’ve met too many Americans who prove, day in and day out, that this is a place where anything is possible.  Yes, we have a lot of work to do to rebuild a middle class that’s had the odds stacked against it now for decades.  That’s the thing about America – our work is never finished.  We always strive to be better – to perfect ourselves.”

He said it is now time for prudent decisions to be made and the Republicans can stand with the American people by passing a budget that will help to grow the economy faster, create jobs faster, as well as lift people’s incomes and prospects even faster.

He noted that Congress only have until the end of the month to pass a budget or shut down the government for the second time in two years.

“Democrats are ready to sit down and negotiate with Republicans right now. But it should be over legitimate issues like how much do we invest in education, job training, and infrastructure – not unrelated ideological issues like Planned Parenthood,” he remarked.

“We need to set our sights higher than that.  We need to reverse harmful cuts to middle-class economic priorities, close loopholes that benefit only a fortunate few at the top, and invest more in the things that help our entire economy grow,” the President added.

President Obama concluded that there is nothing principled about the idea of another government shutdown or patriotic about denying the progress made.  America he said “is great right now – not because of our government, or our wealth, or our power, but because of everyone who works hard every day to move this country forward. Now Congress needs to work as hard as you do.”