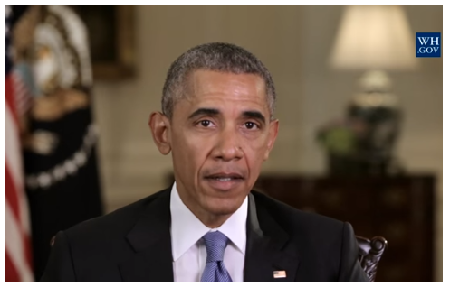 President Obama in his weekly address expressed his sorrow and offered his thoughts and prayers to the people of Belgium and to families of the victims of the terrorist attacks in Brussels, including at least two Americans.

He said that he called the Prime Minister of Belgium and pledged his full support in bringing to justice any terrorists involved in planning or aiding this unconscionable attack on innocent men, women, and children.

“Belgium is a close friend and ally of the United States. And when it comes to our friends, America has their back. Especially as we fight the scourge of terrorism,” he said.

The President said that his administration intends to work tirelessly to root out and defeat ISIL.

“We’ve been taking out ISIL leadership, and this week, we removed one of their top leaders from the battlefield – permanently. A relentless air campaign – and support for forces in Iraq and Syria who are fighting ISIL on the ground – has allowed us to take approximately forty percent of the populated territory that ISIL once held in Iraq.  We’re supporting Iraqi Security Forces who are beginning to put pressure on the ISIL stronghold of Mosul. And we will not stop until ISIL’s safe-havens are destroyed,” he argued.

The President said that ISIL poses a threat to the entire civilized world and his administration is leading a global coalition that will ensure success in their fight against ISIL.

Furthermore, he said Secretary Kerry is leading an international effort to resolve the conflict in Syria.

He also noted that dozens of world leaders are scheduled to arrive in Washington next week for a summit that will focus on nuclear security. However, he said his administration will also use that opportunity to review their joint efforts against ISIL and to make sure the world remains united in this effort to protect people.

“As we move forward in this fight, we have to wield another weapon alongside our airstrikes, our military, our counterterrorism work, and our diplomacy. And that’s the power of our example.  Our openness to refugees fleeing ISIL’s violence.  Our determination to win the battle against ISIL’s hateful and violent propaganda – a distorted view of Islam that aims to radicalize young Muslims to their cause. In that effort, our most important partners are American Muslims,” the President said.

“ That’s why we have to reject any attempt to stigmatize Muslim-Americans, and their enormous contributions to our country and our way of life.  Such attempts are contrary to our character, to our values, and to our history as a nation built around the idea of religious freedom. It’s also counterproductive. It plays right into the hands of terrorists who want to turn us against one another; who need a reason to recruit more people to their hateful cause,” he added.

The President noted that he is a father and could easily identify with other parents who were struck with the awful images from Brussels. This he said dragged his thoughts towards his own children’s safety.

“That’s also why you should be confident that defeating ISIL remains our top military, intelligence, and national security priority,” he explained.