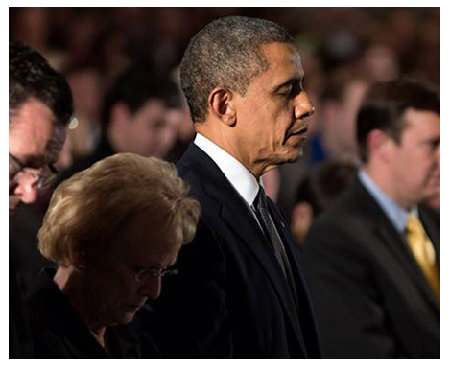 President Obama in his weekly address noted that Americans have shown what it means to be strong in the face of terrorism. He pointed to the fact that in San Bernardino although the people in that community continue to grieve, they have refused to allow fear to overcome them.

He further said, “Across the county, dedicated public servants are on the job – and more will be returning to work this week. Faith communities have come together in fellowship and prayer.  Families lined the streets for the annual children’s Christmas parade—because we can’t let terrorists change how we live our lives.”

He also explained that the army is stepping up its campaign to destroy ISIL.

“Our airstrikes are hitting ISIL harder than ever, in Iraq and Syria.  We’re taking out more of their fighters and leaders, their weapons, their oil tankers. Our Special Operations Forces are on the ground—because we’re going to hunt down these terrorists wherever they try to hide.  In recent weeks, our strikes have taken out the ISIL finance chief, a terrorist leader in Somalia and the ISIL leader in Libya.  Our message to these killers is simple—we will find you, and justice will be done,” the President said.

He stated further that all hands are on deck and moving forward he will be reviewing the U.S. military campaign with the view of accelerating its effort.

Furthermore, he said that he will be going to the National Counterterrorism Center to review the plans in place to prevent attacks and protect the homeland.

In addition, he stated that the Department of Homeland Security will update its alert system to ensure Americans get more information, including steps that can be taken by the individual as well as communities to remain vigilant and stay safe.

“In the wake of the attacks in Paris and San Bernardino, I know a lot of Americans are asking—“what can I do?”  First, as always, we have to stay vigilant.  If you see something that seems suspicious, say something to law enforcement.  Over the years, plots have been uncovered because someone saw something and spoke up,” the President stated.

He posited that “One of the most important things we can do is to stay true to who we are as Americans.  Terrorists like ISIL are trying to divide us along lines of religion and background.  That’s how they stoke fear.  That’s how they recruit.  And just as Muslims around the world have to keep rejecting any twisted interpretation of Islam, all of us have to reject bigotry—in all of its forms.  I’ll say it again, prejudice and discrimination helps ISIL and it undermines our national security.”

He lauded the fact that Americans are coming together to reaffirm the core values that have kept them strong.

He also noted people from across the country regardless of race, color, creed, or political persuasion were all coming together and supporting each other in trying circumstances.

“Across the country, Americans are reaching out — to their Muslim friends, neighbors and coworkers—to let them know we’re here for each other.  I think of the woman in Texas carrying a sign saying, “We love our Muslim neighbors,” he declared.

Finally, the President said the message he wish every Muslim American to hear is “We’re all part of the same American family.”