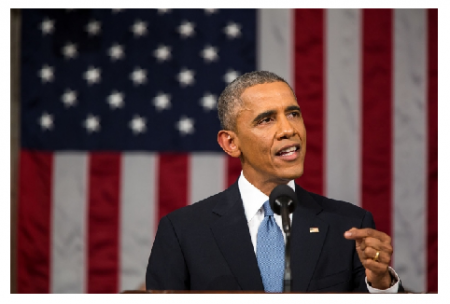 President Obama noted that as President and Commander-in-Chief, his greatest responsibility is the safety of the American people.

He said the fight against terrorists needs to be efficient and effective therefore, the right tools are necessary to defend the nation’s security, protect the freedoms, and civil liberties enshrined in the Constitution.

“But tomorrow — Sunday, at midnight — some important tools we use against terrorists will expire. That’s because Congress has not renewed them, and because legislation that would — the USA Freedom Act — is stuck in the Senate. I want to be very clear about what this means,” said the President.

He further said, “Today, when investigating terrorist networks, our national security professionals can seek a court order to obtain certain business records. Our law enforcement professionals can seek a roving wiretap to keep up with terrorists when they switch cell phones. We can seek a wiretap on so-called lone wolves — suspected terrorists who may not be directly tied to a terrorist group. These tools are not controversial. Since 9/11, they have been renewed numerous times. FBI Director James Comey says they are “essential” and that losing them would “severely” impact terrorism investigations. But if Congress doesn’t act by tomorrow at midnight, these tools go away as well.”

“The USA Freedom Act also accomplishes something I called for a year and a half ago: it ends the bulk metadata program — the bulk collection of phone records — as it currently exists and puts in place new reforms. The government will no longer hold these records; telephone providers will. The Act also includes other changes to our surveillance laws — including more transparency — to help build confidence among the American people that your privacy and civil liberties are being protected. But if Congress doesn’t act by midnight tomorrow, these reforms will be in jeopardy, too,” continued the President.

He explained that the USA Freedom Act reflects ideas from privacy advocates, private sector partners, and our national security experts.

He observed that the Freedom Act has already passed the House of Representatives with an overwhelming bipartisan support and has the support of the majority in the Senate.

The President posited that a small group of senators is standing in the way and are creating a problem in the passing of the Act.

He said, “Unfortunately, some folks are trying to use this debate to score political points. But this shouldn’t and can’t be about politics. This is a matter of national security. Terrorists like al Qaeda and ISIL aren’t suddenly going to stop plotting against us at midnight tomorrow. And we shouldn’t surrender the tools that help keep us safe. It would be irresponsible. It would be reckless. And we shouldn’t allow it to happen.”

“I’m calling on Americans to join me in speaking with one voice to the Senate. Put the politics aside. Put our national security first. Pass the USA Freedom Act — now. And let’s protect the security and civil liberties of every American,” the President concluded.