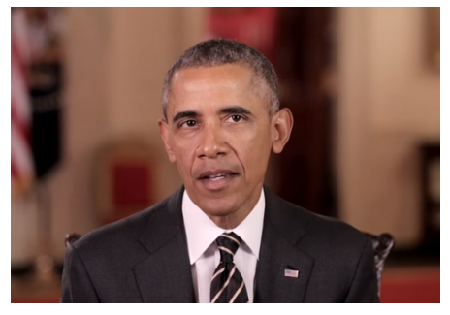 “How can we make sure everyone has a fair shot at success in this new economy?” the President asked.
President Obama in his weekly address explained that in today’s new economic environment, people must adjust to the changes brought about by technology in order to meet the challenges that exist as well as succeed.

He noted that currently workers need more skills than ever before in order to get ahead.
The President posited that education is the key and stated that his Administration has done the following:

Cut the digital divide in classrooms in half

Worked with Congress to pass a bipartisan bill to set the expectation that every student should graduate from high school ready for college and a good job.

“Thanks to the hard work of students, teachers, and parents across the country, our high school graduation rate is at an all-time high,” said the President.

“Now we have to make sure all our kids are equipped for the jobs of the future – which means not just being able to work with computers, but developing the analytical and coding skills to power our innovation economy. Today’s auto mechanics aren’t just sliding under cars to change the oil; they’re working on machines that run on as many as 100 million lines of code. That’s 100 times more than the Space Shuttle. Nurses are analyzing data and managing electronic health records. Machinists are writing computer programs. And workers of all kinds need to be able to figure out how to break a big problem into smaller pieces and identify the right steps to solve it,” he continued.
The President also noted that in this new economy, computer science is not an optional skill as it has become a basic skill that is just as essential as the three “Rs.”

“Nine out of ten parents want it taught at their children’s schools. Yet right now, only about a quarter of our K through 12 schools offer computer science. Twenty-two states don’t even allow it to count toward a diploma,” he said.

President Obama declared that he has a plan that will ensure that all kids get an opportunity to learn computer science, especially girls and minorities.

“It’s called Computer Science For All. And it means just what it says – giving every student in America an early start at learning the skills they’ll need to get ahead in the new economy,” he stated.
The President said he was appealing to Congress to ensure that funding was readily available for the next three years to create opportunities for students at the elementary, middle, and high schools to learn computer science.

In addition, he said, starting this year, his administration will leverage existing resources at the National Science Foundation and the Corporation for National and Community Service to train more great teachers for these courses.

Furthermore, he said that his administration will pull together governors, mayors, business leaders, and tech entrepreneurs to join the growing bipartisan movement around this cause.

He concluded that more and more people are becoming engaged and committed to the cause of helping more kids learn computer skills.

“That’s what this is all about – each of us doing our part to make sure all our young people can compete in a high-tech, global economy. They’re the ones who will make sure America keeps growing, keeps innovating, and keeps leading the world in the years ahead. And they’re the reason I’ve never been more confident about our future,” he said.