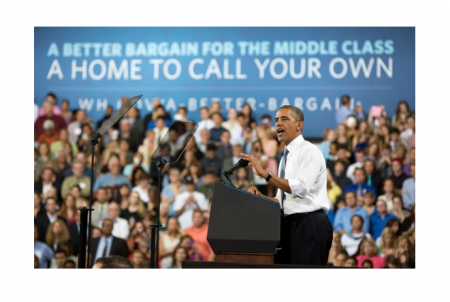 Amidst thunderous applause, in a speech focusing on homeownership and the housing market at Desert Vista High School in Phoenix, Arizona, President Obama laid out his vision for a housing system that promotes the American dream of owning a home.

He first outlined some of the steps his administration has taken in addressing some of the vagaries within the market since he has assumed office in 2009. He noted, however, that over the past year or more there has been many distractions and political posturing, and phony scandals which have shifted the focus away from the peoples’ agenda which he is seeking to channel.

“I’m traveling around, laying out my ideas for how we have to build the cornerstones of what it means to be middle class:  a good job with good wages; a home to call your own; a good education;  affordable health care that’s there for you when you get sick; a secure retirement even if you’re not rich; the opportunity — the ladders of opportunity for people to earn their way into the middle class, to work their way out of poverty.  Those are the elements that I think all of us believe in, but right now we’re not delivering as much as we should on those promises.” he said.

He further pointed out that the heart of the American dream and the middle-class life was the opportunity and chance to have a home to call their own.

The president also argued that “buying a home required responsibility on everybody’s part.  You had to save up to buy a home.  And then banks were supposed to give you a fair deal, with terms you could understand, and buyers were supposed to live within their means and make sure that they could make their payments.  So in that earlier generation, houses weren’t for flipping around, they weren’t for speculation — houses were to live in, and to build a life with.”

He added that, by the time he took office, home values had fallen almost 20 percent from the year before and moreover, there was a rapid decrease in new housing, falling by nearly 80 percent from their peak.

In addition, he noted that the burst in the housing bubble brought about the loss of jobs for hundreds of thousands of construction workers. This scenario was further compounded by a record number of people falling behind on their mortgage payments.

“The housing market is so big that it was going to take some time to heal when it got hurt that badly.  It’s taken longer than any of us would like.  But during that time, we helped millions of Americans save an average of $3,000 each year by refinancing at lower rates.  We helped millions of responsible homeowners stay in their homes, which was good for their neighbors because you don’t want a bunch of foreclosure signs in your neighborhood,” he continued.

He indicated that because of the actions his administration has taken there is a recovery in the housing market. “Home prices are rising at the fastest pace in seven years.  Sales are up nearly 50 percent. Construction is up nearly 75 percent.  New foreclosures are down by nearly two-thirds.  Millions of families have been able to come up for air — they’re no longer underwater on their mortgages,” he declared.

However, he bemoaned the fact that many of the ideas he has put forward that could make a significant difference in the economy in general and the housing market in particular have not received the support of Congress.

Notwithstanding, he further said, “What we want to do is put forward ideas that will help millions of responsible, middle-class homeowners who still need relief.  And we want to help hardworking Americans who dream of owning their own home fair and square, have a down payment, are willing to make those payments, understand that owning a home requires responsibility.”

He listed a number of steps that could be implemented immediately to help create opportunities for people to have their own homes, strengthen the housing market, and relieve some of the burden from people paying mortgages.

One:  A bipartisan act by Congress that would allow every homeowner the chance to save thousands of dollars a year by refinancing their mortgage at today’s rates.

Two:  Make it easier for qualified buyers to buy the homes that they can afford by simplifying overlapping regulations, cut red tape for responsible families who want to get a mortgage but keep getting rejected by the banks and give well-qualified Americans who lost their jobs during the crisis a fair chance to get a loan if they’ve worked hard to repair their credit.

Four:  Rebuild the communities hit the hardest by the housing crisis,  put construction workers back to work, repair rundown homes, tear down vacant properties so that the value of homes in those surrounding areas start picking up.

Five:  Make sure families that don’t want to buy a home or can’t yet afford to buy one still have a decent place to rent.

The president further said that, “In the run-up to the crisis, banks and governments too often made everybody feel like they had to own a home, even if they weren’t ready and didn’t have the payments.  That’s a mistake we should not repeat.  Instead, let’s invest in affordable rental housing.  Let’s bring together cities and states to address local barriers that drive up rents for working families.”

He later underscored the point of the four core principles he would like to see done in addressing some of the reforms in the housing finance system.

First:  A bigger role for private capital in the mortgage market.

Second: The ending of Fannie Mae and Freddie Mac’s failed business models so tax payers are never again on the hook for bad loans and bailouts

Four: Keep housing affordable for first-time home buyers by strengthening the FHA so it facilitates greater access to home ownership and preserves those rungs on the ladder of opportunity.

Finally, President Obama pointed to the importance of having a sound mechanism and proper oversight in place to ensure that the process of owning a home is one that is easy, safe, and  secure. He indicated that this responsibility falls under the purview of  the Consumer Finance Protection Bureau that his administration has created (CFPB)