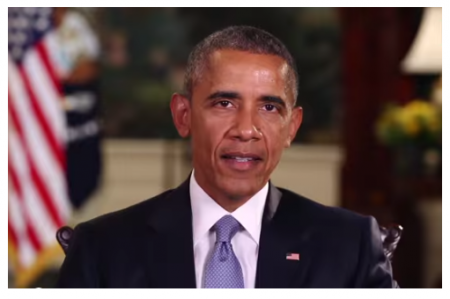 In his weekly address to the nation, the President said that his top priority is to grow the economy and help more hardworking Americans get ahead.  He underscored the point that after the worst economic crisis in recent history businesses have now created 12.6 million new jobs over the past 63 months – a record streak of job creation.

He noted that his administration has been working to reform schools, revitalize manufacturing and the auto industry, revamp job training programs – and rework the health care system, covering more than 16 million uninsured Americans so far.

“We’ve done all of this to rebuild our economy on a new foundation, a foundation for growth that benefits not only us, but our kids, and their kids.  Because we do live in a new economy.  And we’ve got to adapt to make sure America leads the way in this new century, just like we did in the last,” said the President.

He posited that it is important to develop new sources of growth and job creation that keep the U.S. on the cutting edge. He argued that one big way of accomplishing this is through smart new trade agreements that level the playing field for our workers, open new markets for our businesses, and hold other countries to the kinds of high standards that Americans are proud to hold ourselves to here at home.

He explained that something called Trade Adjustment Assistance provides vital support, like job-training and community college education, to tens of thousands of American workers each year who were hurt by past trade deals – the kind we’re not going to repeat again.

He argued that the kinds of new trade deals he is seeking will say no to a race for the bottom, for lower wages and working conditions. He said that these new deals are about starting a race to the top, for higher wages, and better working conditions, stronger environmental protections, and a smarter way to crack down on countries that break the rules of the global economy.

“Republicans and Democrats in the Senate have voted to renew this initiative, but so far, the House of Representatives has chosen to let it expire in just a few months, leaving as many as 100,000 American workers on their own.  For the sake of those workers, their families, and their communities, I urge those Members of Congress who voted against Trade Adjustment Assistance to reconsider, and stand up for American workers,” noted the President.

He further said,“These smart new trade deals aren’t just about growing our economy and supporting good new American jobs.  This is about the kind of country we want to build for our kids and our grandkids.  And if I did not think that smart new trade deals were the right thing to do for working families, I wouldn’t be fighting for it.”

The President concluded that the right thing to do is to engage in trade that’s fair, free and smart as well as that which creates and grow opportunity for the middle class.