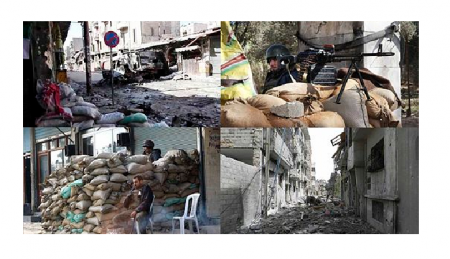 In an attempt to alert the nation to the events as they unfold in Syria and possible military action by the U.S., the President declared that, “Our intelligence shows the Assad regime and its forces preparing to use chemical weapons, launching rockets in the highly populated suburbs of Damascus, and acknowledging that a chemical weapons attack took place. And all of this corroborates what the world can plainly see — hospitals overflowing with victims; terrible images of the dead. All told, well over 1,000 people were murdered.  Several hundred of them were children — young girls and boys gassed to death by their own government.”

In a later address, the President buttressed his argument for limited strike against Syria by stating that there will be no American troops on the ground as the objectives of his administration is to deter the use of and the proliferation of chemical weapons within Syria, prevent Syria’s government from carrying out future chemical attacks, and to deter the behavior of other countries that would be emboldened to act in ways similar to Syria.

Not willing to engage in another mission in the Middle East that could easily spiraled out of control, the President deferred his decision to act by appealing to Congress to support his decision to launch military strikes against Syria, but will they?

The fact is Congress has not supported the Obama administration on domestic issues that are considered vital to the interest and welfare of the American people, so why would they now support Obama on an issue of war with so many unknowns?

The President in deferring his decision to Congress to launch military action against Syria may be considered noble or viewed as shared collective responsibility by the doves in politics but not so for political hawks who see this as tame, indecisive, and weak leadership.

Now, without the consent or approval of Congress, the Obama administration would itself in a losing position both in terms of face and the ability to act without serious repercussion.

Notwithstanding, in a news conference at the G20 summit, President Obama conceded that ultimately he might not receive the support of the American people to take military action against Syria but said regardless of that Congress should vote to approve the action.

The President further noted, “I was elected to end wars and not start them,” but also added, “what I also know is that there are times where we have to make hard choices if we’re going to stand up for the things that we care about. And I believe that this is one of those times.”

In addition, President Obama argued that he has had to make unpopular decision time and again on the basis of what he thinks is the right thing to do.

The international community now waits to see what the world’s largest super power will do.

Good luck on the support from Congress, Mr. President!