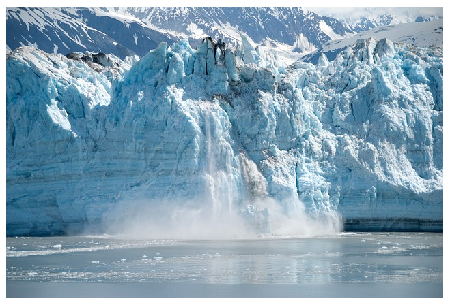 President Obama heads to Alaska for a three day visit and made it clear in his weekly address that his administration is big on protecting the environment for future generation.

He touted the natural beauty of Alaska and noted that for there to be any meaningful take away from his visit it must begin with conversations on climate change. He said that Alaskans are already living with the effects of climate change and noted that today there are more frequent and extensive wildfires, bigger storm surges as sea ice melts faster, and some of the swiftest shoreline erosion in the world – amounting to more than three feet a year in some places.

“Alaska’s glaciers are melting faster too, threatening tourism and adding to rising seas.  And if we do nothing, Alaskan temperatures are projected to rise between six and twelve degrees by the end of the century, changing all sorts of industries forever,” the President declared.

He said that the change is real and currently Americans are witnessing this. He pointed to Alaska’s governor report of four villages that are in “imminent danger” and have to be relocated.

“Think about that.  If another country threatened to wipe out an American town, we’d do everything in our power to protect ourselves.  Climate change poses the same threat, right now,” the President argued.

He further explained that one of the things he will seek to do is to persuade other leaders to rise to the challenge in the pursuit of arresting this threat.

“Since the United States and China worked together to set ambitious climate targets last year, leading by example, many of the world’s biggest emitters have come forward with new climate plans of their own.  And that’s a good sign as we approach this December’s global climate negotiations in Paris,” he said.

The President posited that one of the ways America is leading from the front is by taking action to move away from dirty energy sources that pose a threat to the health of people and the environment.

He stated that even with the acceleration of transition the U.S. economy still depends on oil and gas but it should rely on its own oil and gas.

“I believe we should rely more on domestic production than on foreign imports, and we should demand the highest safety standards in the industry – our own.  Still, I know there are Americans who are concerned about oil companies drilling in environmentally sensitive waters.  Some are also concerned with my administration’s decision to approve Shell’s application to drill a well off the Alaskan coast, using leases they purchased before I took office.  I share people’s concerns about offshore drilling.  I remember the BP spill in the Gulf of Mexico all too well,” the President said.

He concluded that his administration has worked to make sure that oil exploration conducted under leases is done at the highest standards possible.

“The bottom line is, safety has been and will continue to be my administration’s top priority when it comes to oil and gas exploration off America’s precious coasts – even as we push our economy and the world to ultimately transition off of fossil fuels,” he said.