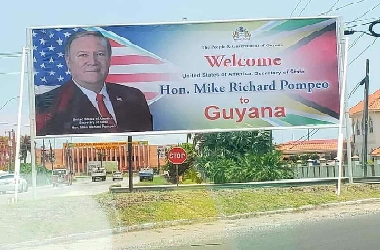 U.S. Secretary of State Mike Pompeo’s trip to Suriname and Guyana marked the first visit to the two South American countries by a top U.S. official in that post.

On his trip, Pompeo touted a partner relationship with U.S. firms and warned both countries of the danger posed by China given the discovery of oil in the region.

Meeting Suriname’s newly elected president, Chan Santokhi, in the capital Paramaribo, Pompeo said it was an “exciting time” for the economy and that the United States is “eager to partner.”

“No state-owned operation can beat the quality of the products and services of American private companies,” Pompeo reportedly said at a joint press conference.

He further said, “We’ve watched the Chinese Communist Party invest in countries, and it all seems great at the front end and then it all comes falling down when the political costs connected to that becomes clear.”

“And we do our level best wherever I travel to make the case for just making sure everybody understands what they’re getting into,” he added, according to a press report.

Guyana is now set to record the fastest economic growth in the world.

At the press conference, with Guyana’s newly elected President Irfaan Ali, Mr. Pompeo lauded the relationship between the U.S. and Guyana as well as how the relations will be strengthened going forward:

“The United States is ready to be your partner – your partner of choice as you face big decisions moving forward, especially on energy and future prosperity in your country.  That’s how Americans will help produce local jobs and sustainable growth for the people of your country.  You should know that the United States AID that works as part of the State Department is on the same page too.  I’m proud to announce this morning that the agency has committed $3 million for a locally led program for citizens’ involvement in their government, and a million and a half so that the youth of Guyana will be involved in democracy as well,” said the U.S. Secretary of State.

He further said the people of Venezuela is being denied the type of democracy that Guyanese currently enjoy and there is a need to end “the illegitimate Maduro regime.”

“We talked about the need for democracy in Venezuela and an end to the illegitimate Maduro regime – the man who’s denying that very democracy that the Guyanese people so love, denying that democracy for the people of Venezuela. You’ve been a strong partner for us on this issue.  You’ve supported statements through the Organization of American States and through the Lima Group.”

He added further, “The United States has now allocated $5 million to help Venezuelans in Guyana who have had to flee from Venezuela to Guyana to escape the horrors and brutality of the Maduro regime.  I trust that that cooperation will continue, and I want to express my personal appreciation for Guyana’s hosting the Venezuelans that have crossed inside of your country.”

Meanwhile, the President of Guyana expressed his appreciation for the visit by Mr. Pompeo and hope for unwavering support from the U.S. government.

“My government is grateful to the United States Government and in particular to Secretary Pompeo for their unwavering support for democracy and constitutional order in Guyana.”

Additionally, he said “Secretary Pompeo’s visit serves to remind us that the U.S. will continue to be a steadfast partner as we work with all stakeholders to consolidate our democracy, strengthen our institutions, and pursue a path of unprecedented economic growth and development.  Secretary Pompeo’s visit, moreover, solidifies the bilateral relationship between Guyana and the U.S. and sets the stage for expanding and deepening U.S. cooperation with Guyana.”

He also announced, “a framework agreement between the U.S. Government and the Government of Guyana to strengthen energy and infrastructure finance and market building cooperation in the context of the Growth in Americas initiatives.”

The President argued that “the agreement will stimulate the enhancement of the business environment for U.S. private sector investment in Guyana, particularly in the fields of energy, both unrenewable and renewables, and infrastructure.”

The agreement comes against the backdrop of U.S. oil major Exxon Mobil Corp, as part of a consortium with Hess Corp, ramped up crude output from Guyana’s massive offshore Stabroek block, a large portion of which is in waters claimed by Venezuela.

“I am pleased to announce that Guyana and the U.S. will deepen cooperation in the area of security with specific attention to maritime security and joint patrols to interdict narcotics trafficking.  This will also allow us to improve our technical and human capabilities in monitoring Guyana’s exclusive economic zone.  This augurs well for stronger collaboration and broader technical assistance to help combat both domestic and transnational organized criminal networks,” stated Ali.