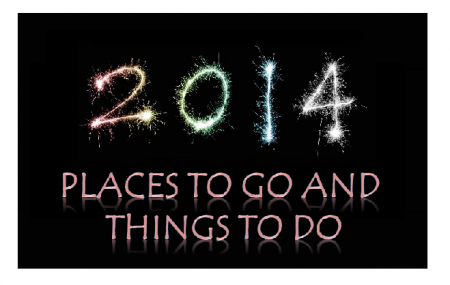 Have a whole year on your hands and still not sure of what to check out? Here are ten options for places around the U.S. and beyond that will give you the thrill-a-minute treatment; whether you want a quiet retreat or a full-throttle adventure.

This immersive, world-building theme park offers its muggle visitors the full experience: from trips to the village of Hogsmeade (have a butterbeer or two!) to treacherous rides like a recreation of the dragon-filled Triwizard Tournament! Dine at the Three Broomsticks and shop around Diagon Alley, procuring the wand and magical treats that you’ll be craving during your adventure!

The nation’s tallest building, One World Trade Center’s 104 stories house a symbol of strength, resilience, beauty, and ambition. Since officially opening in May 2013, One World Trade Center has stood alongside memorials to September 11th as well as office high rises, keeping the focus of the endeavor on the future.

It may be a bit far to see in person, but catch your favorite sports at your pub of choice or at home with friends. Support team USA as they ski, jump, spin, luge, and skate their way through the glorious games!

The world’s hippest indie music festival is more than just some catchy tunes; go to see the styles, the art, the food, and the vibes that are making the millennials feel free. All set to supersized shows headlined by groups like Outkast, Muse, and Arcade Fire.

Whatever your preference – a new year means there will be a big budget flick for you. From the latest Godzilla reboot to Transformers 4 to The Amazing Spiderman 2; the summer will be jam-packed with movie magic. Start the year by catching some of last year’s awards contenders like Gravity or Inside Llewyn Davis in time to cast your vote before the Golden Globes and the Oscars next month.

Make 2014 the year that you catch up on your monuments. Get to know some amazing sites that you haven’t had a chance to hit before. Why not start at the top? Arizona’s majestic Grand Canyon will amaze you and put wanderlust in you. Soon you’ll be heading towards Yellowstone, Carlsbad Caverns, and the Rockies. Enjoy nature and see the country in its untouched beauty.

That’s right – 2014 means that this summer the Fifa World Cup will roar into Rio De Janeiro. Join the world’s favorite sport as teams wage battle for their standings in the tournament.

Having sprung back to life after suffering under the real estate collapse that affected everyone a few years ago; Las Vegas is up, running, and as happening as ever. With new venues and old favorites like the Belaggio and Cesar’s Palace waiting for you- why not take advantage of the strip?

Another city that’s rebuilt itself; New Orleans has repositioned its fortune and become a major draw for students and young entrepreneurs from all around the nation. As soulful as ever but boasting a new class of ever-more-diverse citizenry; New Orleans is on everyone’s list of places to be in 2014.

In an age where Marvel rules both hollywood and the underground world of pop art; Comic Con remains a modern holy grail for the ever-hipper geekdom of today’s sophisticated youth.