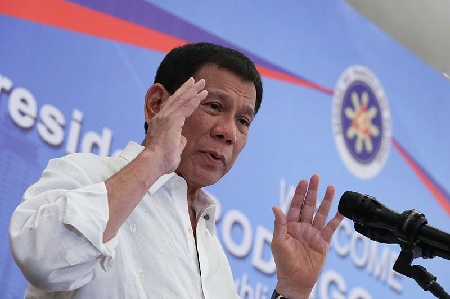 Philippine President Rodrigo Duterte is seeking to withdraw his country as a signatory of the International Criminal Court (ICC) and is urging other countries to do likewise.

The President made his view clear while speaking at a cadet graduation ceremony at the Philippine Military Academy in northern Philippines.

The President is rankled by ICC prosecutors opening of a preliminary examination into the his “war on drugs”, which has led to the death of thousands since it began in July 2016.

The country in its withdrawal bid notified the United Nations secretary-general last week of its decision.

The Philippine leader called the ICC Preliminary investigation an “outrageous” attack by U.N. officials and violations of due process.

“I will convince everybody now under the treaty to get out, get out,” Duterte said. “It is not a document that was prepared by anybody, it’s EU-sponsored.”

About 4,000 Filipinos have been killed by police in the past 19 months in a brutal crackdown that has alarmed the international community. Activists believe the death toll is far higher.

Police say those thousands of deaths were during legitimate anti-drugs operations in which the suspects had violently resisted arrest.