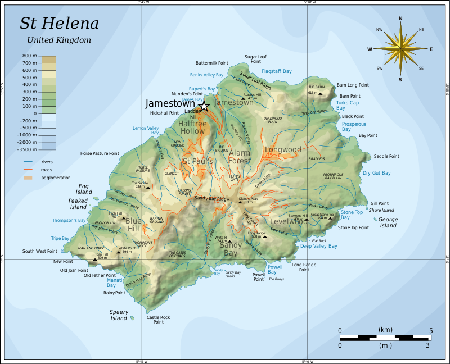 Saint Helena, the volcanic tropical island, located in the Southern Atlantic Ocean is set to open its first airport in a few weeks.

The British Overseas Territory measures about 16 by 8 kilometers (10 by 5 mi) and has a population of nearly 5,000 people.

It was named after Saint Helena of Constantinople and was uninhabited when discovered by the Portuguese in 1502.

It is one of the most remote islands in the world.

Saint Helena served as an important stopover for ships sailing to Europe from Asia and South Africa for centuries.

It is Britain’s second-oldest remaining overseas territory — Bermuda is the oldest.

In March 2015, South African airline Comair became the preferred bidder to provide weekly air service between the island and Johannesburg, starting from 2016.

Though South African airline Comair will not begin scheduled passenger service from Johannesburg for several weeks, one of the airline’s speciallyequipped Boeing 737s made a test flight to the island earlier last week. Other potential passenger routes could stretch to London Gatwick and Cape Town.

French political leader Napoleon Bonaparte was exiled to the island in 1815 and died there in 1821.

Also sent to prison and exiled to Saint Helena was Dinuzulu kaCetshwayo  — a Zulu leader who led an army against British rule.