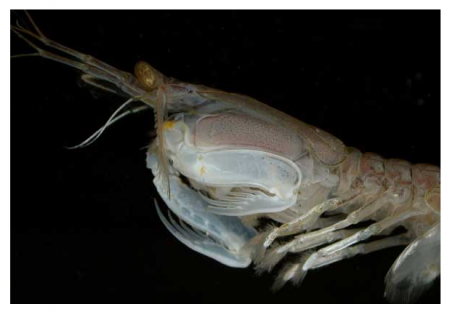 It’s not every day that an ordinary fishing trip turns into an encounter with an oversized alien-like sea creature, but that’s what happened recently to one Florida fisherman.

Steve Bargeron was fishing off a dock in Fort Pierce, Florida, last week when a couple fishing nearby pulled up what Bargeron jokingly described as an “alien creature.” The couple wasn’t interested in keeping the strange, lobster-like animal, which was flopping its tail wildly, Bargeron told Live Science. So, the curious fisherman took a few photos and then threw the critter back into the water.

But Bargeron’s close encounter with this strange-looking specimen isn’t really that strange after all, according to Roy Caldwell, a professor of integrative biology at the University of California, Berkeley. Caldwell said he saw the photos online and instantly recognized the creature as a mantis shrimp, or stomatopod, a marine crustacean commonly found in the waters off Florida.